Regulus is a 35-year-old Aquilifier for the Roman Republic. He has a shaved head and a scar that runs diagonally across his nose. He wears silver armor with brown leather straps over a red tunic. Additionally, he sports a red cape pinned to his right shoulder. It is known that Regulus eats gooseberries.

Regulus became a suspect after Zara and the player found his helmet at the scene of the murder. He was told about the murder and automatically assumed that the Gauls had killed Katurix, branding the tribe as uncivilized savages.

Regulus was spoken to again about the defaced Gallic flag. He confessed to defacing the flag and told them that he had planned to fly the flag the next time the victim came to their tent for negotiations. He said that Katurix lacked respect for the Romans and that he had witnessed him spitting at the Roman flag.

Regulus was found to be innocent after the team incarcerated Venextos for Katurix's murder.

Regulus was one of the guards in charge of parading the spoils of war that Rome had acquired from Gaul. In order to retrieve one of the spoils of war, Katurix's gold, Jack and the player sprayed him, the other guards, and the civilians with pepper spray as a diversion.

Upon hearing of Cleopatra's arrest for the murder of Mark Antony, Octavian sent Regulus to take Cleopatra to him for her trial. Cleopatra willingly surrendered herself so that her trial could commence. 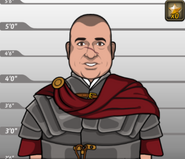 Regulus, as he appeared in Stranded in Gaul (Case #2 of Travel in Time).

Regulus, as he appeared in When in Rome (Case #3 of Travel in Time).

Regulus, as he appeared in Egypt Is Burning (Case #5 of Travel in Time).
Add a photo to this gallery

Retrieved from "https://criminalcasegame.fandom.com/wiki/Regulus?oldid=527746"
Community content is available under CC-BY-SA unless otherwise noted.