Helmaer was a demon assuming the guise of Reggie Pratt, a 32-year-old FBI informant and (now-former) occult dealer and security guard of the Alcatraz Museum.

In his human form, he had blue eyes and short blond hair.

In his demon form, he had dark orange skin, pointed ears, wings and red eyes. He also sported black horns and matching claws.

In his first appearance, he wore a blue and black security guard uniform with front pockets. Moreover, he sported a nametag clipped to his right lapel and an Alcatraz Security badge on his left lapel. It is known that Reggie ate steak tartare.

In his second appearance, he wore a dark orange demon costume with wings and black claws. He carried a matching demon mask with black horns and red eyes in his right arm. In addition, he sported a diagonal scar across his nose from right to left. It is discovered that he took a falls boat tour and had high blood pressure.

In his third appearance, he wore a navy blue polo shirt with maroon collar. He also sported a small white bandage on his left jowl. It is revealed that he had insomnia, drank IPA, and was dyslexic.

In his fourth appearance, he ditched his bandage. It is noted that he had access to experimental truth serum, ate fiddlehead ferns and rode a bicycle.

In his fifth appearance, he sported war paint all over his face. It is learned that he drank human tears, bathed in the River Styx and had a pet hellhound.

Reggie became a suspect after Gwen and the player learned that he was the one who had contacted them about the murder. He revealed that he had gone to junior high with the victim. When Danny was bitten by a werewolf, Reggie let him and his pack lock themselves up every full moon in an abandoned wing of old Alcatraz. Reggie then led Gwen and the player to the prison wing where the werewolves were staying.

Reggie was spoken to again about the cash envelope that the victim had given to him. He admitted to extorting the werewolves, claiming that his wife had ordered him to charge the werewolves a small fee to use the wing as Reggie's wages were poor. However, his wife kept making him increase the fee, which meant that Danny could no longer afford to make the payments.

Reggie was found to be innocent after the team incarcerated Serena Kwame for Danny's murder.

Reggie became a suspect again after Luke and the player found the vials he had given to the victim in his van. Initially, he scared the team, before revealing that he was only wearing a costume. After being told about the murder, he admitted that he had become an occult dealer after his experience at Alcatraz. After seeing Ronnie's TrendVid show, he contacted him to expand his client list.

Reggie was spoken to again about him cutting the victim's brakes. He revealed that Ronnie was trying to extort money out of him, saying that he would not help Reggie find new customers unless he paid him more money. Furious, he sabotaged the brakes on Ronnie's van.

Reggie was found innocent again after the team incarcerated Wendall Goh for Ronnie's murder. Later, Ronnie's body went missing from Ben's trailer. Upon finding the body, Ben performed another autopsy and discovered that Ronnie's body had been drained of all of its blood. After Felix revealed that dhampir blood was valuable on the black market, Luke and the player confronted Reggie, suspecting him to be the culprit. Reggie denied the accusation, claiming that he could prove his innocence. He told the team about one of Ronnie's devices that could locate a supernatural creature's DNA using a small sample of the DNA. After Luke and the player found the device, they identified Ronnie's mother, vampire coven leader Roxanne Vega, as the true culprit.

Reggie became a suspect for the third time after Luke and the player found his cap in the lost and found of The Fifth Amendment Bar. He told the team that he was in town for pleasure as he had wanted to visit the nation's capital. After being told about the murder, Reggie recalled seeing Dan, mentioning that he had been riled up and was carrying on about mummies. Since Dan was intoxicated, Reggie dropped him off at where he was staying.

Mid-investigation, Reggie was seen at The Fifth Amendment Bar when Chief Arrow and the player confronted the mummy who had escaped from the Smithsonian Museum. Reggie asked if he was being pranked, but Chief Arrow warned him to stand back. Chief Arrow then lured the mummy back to the museum with the scarab amulet.

Reggie was spoken to again about his FBI notes on the victim. Initially denying that he was involved with the FBI, he admitted that he was working for the FBI and had stopped his occult trading business. He revealed that he was keeping the victim under surveillance for an agent as the feds were convinced that Dan was connected to an antiquities smuggling ring. However, he did not know if their suspicions were true.

Reggie was found to be innocent for the third time after the team incarcerated Theresa Rosenthal for Dan's murder.

Reggie became a suspect once again after FBI Agent George Mathison and the player found his wallet in the control room. He claimed not to know Theresa and said that he had only gone to the FBI headquarters to turn in the receipt for the demon costume that he wore when he went undercover at the supernatural ball. He told the team that he did not know what had happened and left to run errands.

Reggie was spoken to again about his attempt to break into Theresa's house. After initially denying the accusation, he admitted that he had broken into her house to look for supernatural artifacts to sell. He then angrily denied killing Theresa and left the interrogation.

In the end, it was proven that Reggie was Theresa's killer. When confronted by Gwen and the player, he admitted that he drove Theresa to suicide by digging through her memories for any information regarding Rathimael and the fifth key to the demon queen's cage. He then revealed himself to be the demon that infiltrated Gwen's mind throughout the Midwest. He then told the team that they already knew about the fifth key before teleporting away.

At the end of the investigation, Reggie encountered the team in the between-dimension. He was seen carrying an unconscious Hope to the demon queen's cage. He unlocked the cage and released the demon queen.

Reggie became a suspect for the fifth time after he ran into the team at the crime scene. After Reggie taunted the team, Luke informed him that Arthur was dead. Reggie admitted that he wanted to kill Arthur, calling him a traitor, but he was not responsible for the murder as the demon queen needed Arthur alive. He told the team that he was not privy to the demon queen's master plan and left to prepare for the invasion.

Reggie was spoken to again about his true relationship with Arthur after Luke and the player found their childhood drawings. Reggie admitted that he was Arthur's brother. After the demon civil war, Arthur disappeared mid-battle, so the queen's supporters tortured Reggie for days, attempting to get information on Arthur's whereabouts. The torture stopped when the queen intervened, resulting in Reggie owing his life to her. 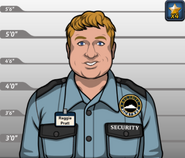 Reggie, as he appeared in Hour of the Wolf (Case #4 of Supernatural Investigations). 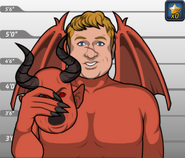 Reggie, as he appeared in Niagara Fallen (Case #22 of Supernatural Investigations). 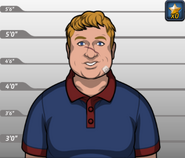 Reggie, as he appeared in Scarab to Death (Case #24 of Supernatural Investigations). 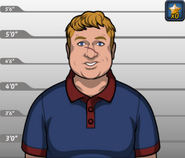 Reggie, as he appeared in The Third Degree (Case #25 of Supernatural Investigations). 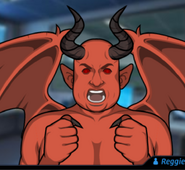 Reggie, revealing himself as a demon during his arrest for Theresa Rosenthal's murder.

Reggie, as he appeared in Death at a Funeral (Case #26 of Supernatural Investigations). 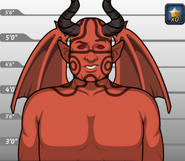 Reggie, as he appeared in To Hell and Back (Case #30 of Supernatural Investigations). 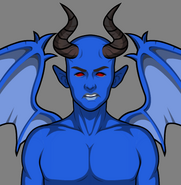 Retrieved from "https://criminalcasegame.fandom.com/wiki/Reggie_Pratt?oldid=535604"
Community content is available under CC-BY-SA unless otherwise noted.