Reggie Perez was a suspect in the murder investigation of his ex-girlfriend, actress Felicia Steppingstone, in The Young and the Lifeless (Case #31 of Pacific Bay).

Reggie is a 25-year-old DJ of Hispanic-American heritage who primarily operates in Ivywood Hills.

Reggie is shown to have black hair which is mostly in the crown area of his head. He dons a lime green t-shirt with red stripes in the shoulder area, complete with a red 'SWAG' written on it. As a DJ, he sports a pair of headphones, tucked to his neck. To complete his look, Reggie wears a gold chain as well as a gold crown necklace, a badge symbolizing the Utopians, and a pair of diamond earrings. It is known that Reggie drinks protein shakes, drives a convertible and uses teeth whitener.

Reggie found himself in trouble after the player found a CD containing love songs for Felicia, with Hannah identifying the originator of the CD to be Reggie. Reggie was in a relationship with Felicia at the time of her death given Hannah announcing that the two were dating publicly for a few months prior to the events of this case. Frank and the player rushed to the dance club where Reggie operated as a DJ for interrogation.

Reggie proved to have a bad temper as he wanted revenge for the death of Felicia, but Frank told the DJ to calm down. Reggie admitted that he was in a relationship with Felicia—even going far by proposing to the actress, but with Felicia gone, Reggie now had no one to sing love songs to. He wanted to take the matter to his own hands but the player told the DJ to let the police handle it.

During a recap, Roxie pleaded with Frank and the player to watch a viral proposal between Reggie and Felicia on TrendVid, in which the actress turned down Reggie's proposal—suggesting the two to break-up, infuriating the DJ. Frank suspected that a break-up and Felicia's murder were linked, so another discussion with the DJ was necessary.

Reggie started by talking in the third person, but an irritated Frank told him not to do so. Reggie tried his all to impress Felicia at all corners, but none of what he did impressed her at all. Frank thought of Reggie committing bloodshed in retaliation for a break-up, but the DJ made one thing clear—"DJ Reggie P" had a temper but he didn't believe in bloodshed at all.

Reggie was cleared of murder charges when an ulterior motive was exposed at the end of the investigation, but had to go through another problem.

Russell made a false arrest after the player deduced that the lipstick left by Abbi Absinthe was not plausible to mark the reality star as the thief of Felicia's only film, so the player took Frank to do an audit at the Imperial Theater, the location of the theft. The player found a film roll box and took a sample of the thief's skin cells, thus shipping it to Yann for clinical analysis.

Reggie refused to talk to the police, claiming that he was busy at the moment, but Frank informed the DJ that he broke into the Imperial Theater to steal Felicia's film rolls, to which Reggie responded that he wanted revenge for Felicia's humiliation, so to ensure that her fame was not overshadowing him, Reggie stole the late actress's film roll. Frank then detained and fined Reggie for grand theft, and thereafter the player told Russell that he needed to apologize to Abbi for false arrest. The player wasn't too pleased about Russell's false arrest, thus informing Chief Marquez about it, prompting the Chief to inform the psychologist that the next false arrest would be grounds for suspension from the force. 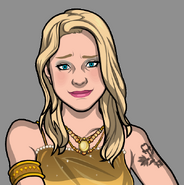 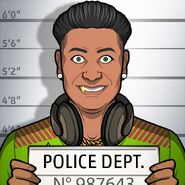 Retrieved from "https://criminalcasegame.fandom.com/wiki/Reggie_Perez?oldid=409224"
Community content is available under CC-BY-SA unless otherwise noted.