Reggie Liotta was the victim in Writer's Blocked (Case #21 of The Conspiracy).

Reggie was a historian and the author of the book Xerda's Return. He had tousled blond hair and blue eyes. At the time of his death, he was wearing a mahogany red collared shirt, beige pants, and a blue patterned scarf. He was also holding a copy of his book.

Reggie was found at the Grimsborough Museum with his head bashed in. Per Martine, he was killed after being struck with a blunt object that crushed his skull. She also detected a slight discoloration on his neck, which turned out to be an allergic reaction to hand sanitizer. Given his allergy, Martine concluded that the hand sanitizer was left behind by the killer, presumably while checking Reggie's pulse to make sure he was dead. This meant that the killer used hand sanitizer.

Later, Gloria and the player found a Xerdan stone club in the museum's outdoor exhibition. Per Rita, the blood on it matched the victim's, making it the murder weapon. Furthermore, Rita found isopropyl alcohol on the handle, an alcohol used to clean glasses. This proved that the killer wore glasses.

It was discovered that Reggie had an affair with museum night guard Jerry Miller when the former had asked him for exclusive access to the exhibits after hours in exchange for sexual favors. Book publisher Steve Roy was discovered to have been capitalizing on the victim's death and even raising the price of Reggie’s book, Xerda’s Return. Tour guide Laura Crosby was also angry at Reggie because he would dictate so much information about Xerda that people stopped coming to Laura’s tours. Reggie also angered museum curator Jebediah Cobb when the former refused the latter’s contributions into his book. Reggie also angered his friend Ally Salinger by not adding her to his list of dedications in his book despite being a rock for him through his hard times.

The killer turned out to be Jebediah.

Upon admitting to the murder, Jebediah said that Reggie had discovered that Xerda was a matriarchal society, which went against Jebediah's findings that they were a patriarchal society in his book, The Lost City of Xerda. Afraid that Reggie's book would expose his life's work as a fraud, Jebediah begged him to reconsider the publication. When he refused, Jebediah had bludgeoned him with a Xerdan stone club. Judge Powell sentenced him to 10 years in prison for the murder. 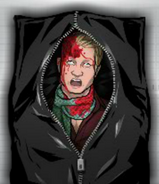 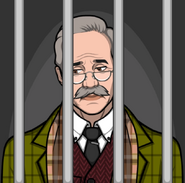 Jebediah Cobb, Reggie's killer.
Add a photo to this gallery

Retrieved from "https://criminalcasegame.fandom.com/wiki/Reggie_Liotta?oldid=469555"
Community content is available under CC-BY-SA unless otherwise noted.