Reggie Bates was the killer of Commissioner Talmadge Baldwin in Hold Your Tongue (Case #33 of Mysteries of the Past).

Reggie is a 43-year-old cafe owner. He has short black hair and wears a black beret. He dons a black vest with a seagull guano stain over a white shirt and blue tie, as well as a pair of white gloves. It is known that Reggie is allergic to factory fumes, drinks Mazundan coffee and knows Japanese culture.

Reggie became a suspect after Diego helped Maddie and the player find where the killer had been: a cafe called The Concordian Pause. As the owner of the establishment, he was informed about the murder. He said that Talmadge used to come to the cafe all the time. When asked if he had noticed any of his customers acting suspiciously, he said that his cafe was open to everyone. He then wished them the best of luck in their investigation.

Reggie was spoken to again about a newspaper claiming his cafe was one of the victim's targets to shut down prohibition violators. He explained that the victim's daughter complained that her coffee had tasted different, leading the victim to believe it had been spiked with whiskey, even though he claimed it wasn't. He threatened to tell the Mayor about his violations, which would lead to him losing his license.

In the end, the evidence had ended up pointing towards Reggie as Talmadge's murderer. Reggie initially denied the accusations but then admitted to the crime. He revealed that he had killed Talmadge not because of his prohibition violations, but because he had been spying on the Italian gang. When Maddie questioned why he cared about the Commissioner's activities, he revealed that the gang had taken him in when he was a boy after his parents had died. In exchange for their hospitality, he killed Talmadge to protect them. Judge Lawson sentenced him to life in jail without parole.

After the trial, Isaac and the player questioned him about his use of Horatio Rochester's telegraph machine, where he sent a message to the gang where he stated that Talmadge knew about the plan, and he would keep him quiet. However, Reggie refused to snitch on the gang and laughed as he had thrown all of his notes into the river. With this information in mind, the player and Isaac decided to head to the docks to salvage any remaining evidence about the Italians' plans. 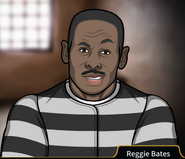 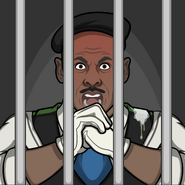 Reggie, sentenced to life in prison for the murder of Talmadge Baldwin. 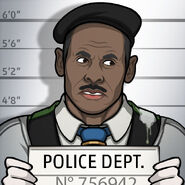 Retrieved from "https://criminalcasegame.fandom.com/wiki/Reggie_Bates?oldid=488346"
Community content is available under CC-BY-SA unless otherwise noted.