Rebecca Moire was a suspect in the murder investigation of escaped convict Tess Goodwin in Ashes to Ashes (Case #55 of Grimsborough).

Rebecca is a 21-year-old blonde-haired, blue-eyed Gothic high schooler. She dons a black hat with a purple stripe and a neon purple veil at the front. She is also wearing a black transparent shirt with a black singlet underneath it. Besides that, she is seen wearing a white lace brassiere. Other than that, she usually wears red lipstick and wears a pentagram necklace. She also has an aqua snake tattoo on her left arm and scratch marks on her neck. It is known that Rebecca knows witchcraft and owns a black cat.

Rebecca was caught by the police taking pictures of the crime scene where the body of Tess Goodwin was found. This prompted Jones and the player to question Rebecca right-on-the-spot.

Rebecca claimed that she wanted to take pictures of wildlife, but opted to take a picture of Tess burning on the bonfire in the crime scene, feeling that she was an intelligent killer. Rebecca's picture-taking annoyed the team, so her camera's memory card was confiscated since it was now evidence for a murder investigation. Eventually, the analysis revealed Rebecca having some contact with Luna Hecate.

Rebecca was then shipped to the interrogation room for the remainder of the investigation, and when the team found fan letters Rebecca wrote to Tess, the team interrogated Rebecca a second time. Rebecca had great respect for Tess but since Rebecca could not master hypnosis, she had to master witchcraft so that one day Tess would be her sidekick, but Tess did not like what Rebecca had in mind as Tess had ulterior motives, and alas Rebecca stopped admiring Tess.

Rebecca was let go after Luna was found guilty of Tess's death. 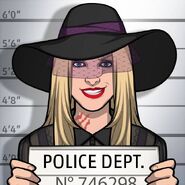 Retrieved from "https://criminalcasegame.fandom.com/wiki/Rebecca_Moire?oldid=508468"
Community content is available under CC-BY-SA unless otherwise noted.