Raoul Colletti was a suspect in the murder investigation of teenager Jennifer Carter in The Grim Butcher (Case #3 of Grimsborough).

Raoul is a 42-year-old butcher who runs the butcher's warehouse with his daughter Trish Colletti and his apprentice Raphael Soza. He has short black hair and brown eyes, and dons a yellow butcher's shirt with a white apron sporting a blood stain. It is known that Raoul's feet measure 10 inches.

Raul was spoken to as a dead body was found in his butchery shop. The team collected the body and identified it as the body of Jennifer Carter. After being asked about her, Raoul said Jennifer was a sweet girl who always came to his shop. and told the police about the other people who had access to the warehouse.

Raoul was interrogated again when Jones and the player found the victim's phone which contained a text message sent to Raoul by Jennifer. In it, Jennifer called him a pig and said that he was going to pay for what he did. Raoul said he did not knew anything about it and took it as a joke. 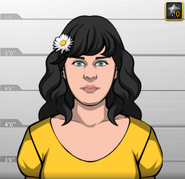 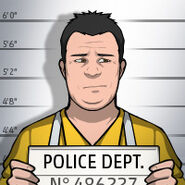 Retrieved from "https://criminalcasegame.fandom.com/wiki/Raoul_Colletti?oldid=479495"
Community content is available under CC-BY-SA unless otherwise noted.