Fielding was a 30-year-old oil tycoon. He had blue eyes, light brown hair, a five o'clock shadow and a mole above his left eyebrow. He wore a white shirt with a turquoise bolo tie under a brown waistcoat with gold buttons. Additionally, he sported a brown cowboy hat. It is known that Fielding knew how to sew, collected spiders and believed Mexican superstitions.

Fielding became a suspect after Gwen and the player identified him in one of Marigold's selfies. He claimed to have not known the victim, but said that she had seemed excited to meet him because he was a billionaire. He admitted to being jealous of her enthusiasm, claiming to be bored with the world.

Fielding was spoken to again about the Day of the Dead mask he gifted to the victim. He revealed that he had been enamored by Marigold's Buzzer feed and had booked a ticket when she posted that was going on the island tour. He bought her the mask in order to win her affection, but she rejected him.

Fielding was found to be innocent after the team incarcerated Tiffany for Marigold's murder.

After arresting Dr Lucrezia Stein's killer, Gwen and the player asked former police officer Greg Schmidt about the tarot card murders. They found the password to his online investigation reports and gave it to Hope for analysis. She revealed that the murders stemmed down to the five-year old murder of Abigail Riley, who had died of suffocation while staying with six of her friends. The five killers in the murders (including Jesse Adams and Justine Bankston) were all named as friends of Abigail. Hope then revealed that the sixth friend was Fielding, prompting Gwen and the player to get to Fielding before Abigail possessed him.

Later, Hope tracked Fielding's car to Devilman's Bridge. The team then rushed to find Fielding before he was possessed into committing murder.

Fielding's body was found by Luke and the player next to the Devilman's Bridge, hanging upside down from a cactus. Ben confirmed that the killer had knocked Fielding out before dragging him to the bridge and hanging him, leading to Fielding's death by asphyxiation. Ben also found traces of chicken fried steak on the rope, allowing him to conclude that the killer ate chicken fried steak.

Fielding bullied artist Axel Bross at college. When he tried to reconnect, Axel turned his invitation down. Irritated by environmental activist Zeke Davis, Fielding fabricated photos of Zeke being environmentally unfriendly in order to silence him. Prior to his murder, Fielding got drunk with author Arthur Darkwood and drunkenly claimed that he did not deserve the life that he had. When he realized what he had done, he had his lawyers file Arthur a gag order. TrendVidder Ronnie Hawk made contact with Abigail Riley, who agreed to let Ronnie interview her if he persuaded Fielding to go to the abandoned house. Fielding also crossed paths with escaped asylum patient Greg Schmidt, who tried to an elicit a confession to Riley's murder.

The killer turned out to be Axel.

Axel admitted to being in love with Riley even after her death. Thus, when Riley asked him to kill Fielding, he obliged, knocking him out with chloroform and suspending him upside down like the tarot card "The Hanged Man". He then detailed that Fielding, Jesse, Justine, and the three other people that Riley had driven to suicide had summoned a demon. Unexpectedly, it worked, with the demon promising them knowledge in exchange for Riley's life. The six continued on with the ritual, killing Riley and gaining knowledge on the location of reservoirs of natural resources, leading to their successes in the oil, copper, and gold industries, respectively. Riley then appeared, demanding that the team let Axel go. When the team refused to back down, Riley possessed Luke's body and ran away with Axel, threatening to shoot Luke if they ever followed him.

Axel was later placed under arrest by FBI agent George Mathison, while Riley was driven away from Luke's body with the exorcism Felix conducted. 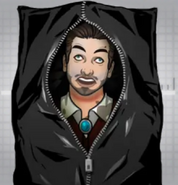 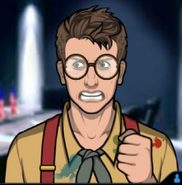 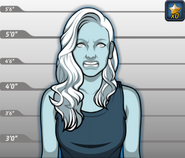 Fielding featuring in The Ghost of Murders Past's teaser.
Add a photo to this gallery

Retrieved from "https://criminalcasegame.fandom.com/wiki/R.J._Fielding?oldid=519902"
Community content is available under CC-BY-SA unless otherwise noted.