Quentin is a 57-year-old lawyer and (now-former) village leader of the survivors of the HMS Unsinkable. He has disheveled, short gray hair and a mustache. He wears dirtied, torn clothes; he sports a red patterned waistcoat under a powder blue jacket with yellow collars. Additionally, he dons a white ascot. It is known that Quentin has read The Tempest.

In his quasi-suspect appearance, his hair and clothes are clean.

Quentin became a suspect after Zara and the player identified him as one of the islanders. He asked the team if they had any provisions on their ship (they did not) and was informed about the murder. He described the victim as a "most pious Christian lady" and did not know of anyone who wanted to wish her harm.

Quentin was spoken to again about his buried message in a bottle which described the victim as a "crazy woman". He revealed that the victim had buried the message as she was desperate for the survivors not to leave the island. He claimed that the victim adored lording over the islanders and loved making all of the rules.

Quentin was found to be innocent after the team incarcerated Curly Stubbs for Evangeline's murder. As the newly appointed leader of the clan, Quentin sentenced Curly to be exiled from the village to the barren north of the island. He then informed Curly that villager Monday had kindly agreed to assist him until he was able to survive on his own.

Later, Zara and the player discovered (per Orlando) that Captain Blackbeard's treasure was buried in the middle of the islanders' village. Zara and the player requested Quentin's permission to dig in the village. They explained that they had been tasked by the East India Company, prompting Quentin to grant them permission. In return for allowing the team to dig on their land, he required a favor. Zara then promised to take the islanders with them if they were ever rescued.

After arresting Henri Pelletier's killer, Zara and the player were reunited with Quentin after Isadora Haddonfield persuaded him to help free Black Sparrow Captain Mary Read. Quentin told the team that the villagers had used Kai's makeshift flare gun to hail a passing ship a few days after the team left. After they freed Mary, Zara then asked Quentin to be the replacement auctioneer. Quentin gladly accepted the position and headed to the Severine Estate. 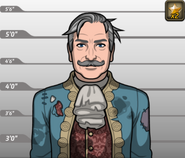 Quentin, as he appeared in Shipwrecked! (Case #23 of Travel in Time). 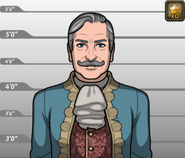 Quentin, as he appeared in Going Once, Going Twice, Dead! (Case #25 of Travel in Time).
Add a photo to this gallery

Retrieved from "https://criminalcasegame.fandom.com/wiki/Quentin_Montague?oldid=501311"
Community content is available under CC-BY-SA unless otherwise noted.