Queen Mary III (initially appearing as The Queen) was a suspect in the murder investigations of her grandson, Prince Albert, in God Save the Prince (Case #1 of World Edition) and agent Jonathan Stafford in Politically Incorrect (Case #53 of World Edition).

Mary is the 85-year-old queen of England. She has short gray hair.

In her first appearance, she wears a pink dress decorated with roses. She has a blue sash and a sapphire-studded brooch over her dress. She has a pearl necklace, around her neck, pearl earrings, and a crown atop her head. It is known that Queen Mary drinks tea, rides horses and quotes Shakespeare.

In her second appearance, she dons a pink coat decorated with roses and lined with fur. She has a dark pink hat with a bow and roses, and a white decorated scarf. She also has sapphire earrings. It is discovered that she hunts and owns a pet corgi named Sir Wagglesworth.

Jack and the player were summoned by the Queen when she heard that they were investigating her grandson's murder. She made it clear that she would be keeping an eye on the investigation, and that when the killer is caught that they be brought to her. When Jack asked if the victim had any enemies, she went on to say that everyone loved him, and sent them off to search for his killer.

Her Majesty was spoken to again after the team found that she was reading the prince's diary. Jack told her of the situation they were in with Count Rupert, but Mary saw that as motivation for them to get the case over with sooner. When asked about the diary, she said she was worried about him. According to her, the victim had been sneaking out of the castle at night, and saw in his diary that he no longer wanted to be Prince. She felt that she had failed her grandson, and reminded the player not to fail him too.

Mary was found to be innocent after Enid Grimshaw was incarcerated, and she managed to get them out of trouble with Rupert as well. However, she requested their help again with Count Rupert's disappearance. With what happened in the investigation, Jack was reluctant to search for him; but Mary did not want to take any chances of him being kidnapped or worse. She said that Rupert was last seen in the jewel house trying on the Crown Jewels, so they began their search there.

Mary became a suspect again after the player and Jack found her by Camp Rushmore. She said the President had asked her for advice on the current crisis, having some experience on the matter from the Brexit fiasco. Though she said she was not at liberty to discuss those matters, and was appalled that she was a suspect again, but she was not allowed to leave until the investigation ends.

Mary was spoken to again regarding the victim's blood found on the dog cone of her corgi. She said the victim was responsible for hurting the dog, that he ran over him with the President's vehicle. As for the blood, that got on the cone because the dog discovered the victim and alerted the authorities. 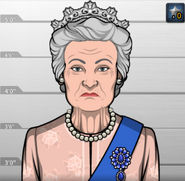 Queen Mary III, as she appeared in God Save the Prince (Case #1 of World Edition). 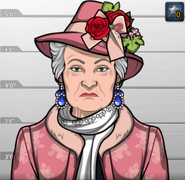 Queen Mary III, as she appeared in Politically Incorrect (Case #53 of World Edition). 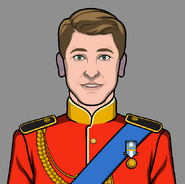 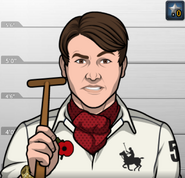 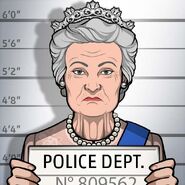 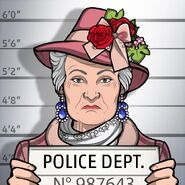 Retrieved from "https://criminalcasegame.fandom.com/wiki/Queen_Mary_III?oldid=430383"
Community content is available under CC-BY-SA unless otherwise noted.