Pyo[a] is a 25-year-old film school graduate who was a fan of the victim. He has short black hair and facial hair, and wears a pair of glasses. He dons a dark blue suit over a white shirt and black tie, and is seen carrying around a folder of pitch ideas. It is known that Pyo eats kimchi.

Pyo became a suspect after Carmen and the player identified him on a photo of him and the victim. He was devastated at Gwak's death, saying he was his hero who had changed Korean TV single-handedly. Ever since he was a little kid, Pyo said he wanted to be like him. As Carmen and the player were about to leave, he said he would do anything he could to help find Gwak's killer.

Pyo was spoken to again about him apparently being banned from the studio. He said that the victim simply overreacted, and that he had good ideas for the show but the victim ignored them. However, Pyo said he did not want to give up, even after he got banned he still came to the studio. The victim responded by having security beat him up and throw him into the park, Pyo felt embarrassed at that.

Pyo was found to be innocent after the team incarcerated Kang Dong-yun for Gwak's murder. 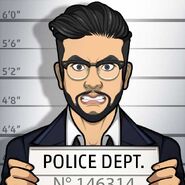 Retrieved from "https://criminalcasegame.fandom.com/wiki/Pyo_Kun-woo?oldid=454994"
Community content is available under CC-BY-SA unless otherwise noted.