Priya Desai (Hin: प्रिया देसाई) is a main character appearing in Season 7 of Criminal Case, where she serves as the Chemist of the Supernatural Hunters.

36 years of age, Priya has brown eyes and long, tied-back, curly brown hair. She wears an ochre, floral-patterned blouse under a white lab coat. She sports a gold crescent pendant, a pair of gold oval earrings with rubies and maroon lipstick. Additionally, she has a mole under the right side of her collarbone.

Priya became a werewolf after being attacked by one. She was rescued by Ben, who introduced her to the supernatural. When she joined the team, she gave up her job at a big pharma, despite being a career-focused perfectionist. On the road, she misses her big family, but passes her time by mixing cocktails and knitting.

In her suspect appearance in A One-Wolf Open Slay, Priya ditches her lab coat, revealing her torn and dirty blouse. She also sports windburn and scratch marks on her forehead and left arm. Moreover, her hair is disheveled and has a twig sticking out. It is known that Priya drinks cocoa, knits and reads The Slopes and the Self.

In her quasi-suspect appearance in Winter Murderland, Priya wears a white winter jacket with white fur over her blouse, as well as a red scarf.

After arresting Lucy Winters' killer, Priya told the player that she was a werewolf, becoming one after being attacked by a werewolf one night when she walked home late. Fortunately, Ben arrived on the scene and saved her, explaining to her about werewolves. She did not believe him until the next full moon, in which she transformed into a werewolf for the first time. Due to her chemistry expertise, Chief Arrow recruited her as a chemist while volunteering to keep her secured on full moons.

Afterward, Priya told the player that she was worried about Lucy's friend, partygoer Mina Reynolds, who had found out that vampires were real. Sympathizing with Mina, Priya wanted to introduce her to the supernatural properly. Priya and the player went to the Stone Giant to meet with Mina, although she did not turn up. Per Hope's analysis of Mina's phone, they learned that she had photographed a pair of vampire eyes, prompting them to speculate that Mina had been attacked and kidnapped by a vampire.

Priya and the player spoke to US vampire coven leader Dr Aculus about Mina's disappearance. He refused to give them a list of all known vampires, but pledged to help them out in looking for Mina. Later, Hope was able to track Mina's smartwatch to an Oregon forest, prompting them to head to Oregon.

Mid-investigation, supernatural hunter Ruth Wu held Priya hostage and threatened to kill her after she had gone out onto the pier to see where Danny Kwame, a fellow werewolf, had died. After Gwen threatened to shoot Ruth, she released Priya and fled. Priya thanked the team and headed back to the base.

After arresting Danny Kwame's killer, Priya and the player searched for the Dawn of Night flower, an ingredient in the vampire elixir of invincibility. Per werewolf Zander Stark, they found the flower in a forest clearing. After they verified it, Priya gave it to Felix for safekeeping. However, the flower was taken by rogue vampire Eric Zwart after he attacked Felix.

In Colorado, a full moon meant that Priya had to be caged so that she could not cause trouble when she transformed into a werewolf. However, she had broken out of her cage, prompting the team to go look for her. In the process, Gwen and the player found the body of Ruth Wu.

In a surprising turn of events, Priya became a suspect after she returned to the team and claimed that she had killed Ruth. She revealed that her chain had not held, allowing her to break free from her cage. When she transformed back into a human, she heard about Ruth's murder and assumed that she was responsible. Gwen reminded her that werewolves never remembered what happened during a full moon, but Priya explained that she had seen Ruth at the Christmas market prior to her murder. Gwen told Priya to allow Ben to look after her whilst they investigated the Christmas market.

Priya was spoken to again about her drawings of Ruth. She admitted that she had been unable to get Ruth out of her head since the events in San Francisco and had been planning her revenge ever since. She told the team that she had gone after Ruth like a predator during the full moon. Gwen told Priya that she only thought that she was guilty because of her inability to accept that she was a werewolf, causing Priya to storm off.

Priya was found to be innocent after the team incarcerated Sam Ellis for Ruth's murder. After alpha werewolf Annette Strong exiled Sam from their pack, Priya apologized to the team for freaking out. Later, Priya determined that a werewolf was working with demons after finding werewolf hair on a cub killed by demons. Priya and the player spoke with Annette, who denied knowing about a rogue werewolf. Annette then offered Priya a spot in her pack, which she rejected.

After arresting Jerry McKenzie's killer, Priya told Chief Arrow and the player that she wanted to joined Annette's pack in Utah as an undercover mission so that they could find out more about the alleged alliance between werewolves and demons. Chief Arrow expressed his concerns, but Priya explained that she was willing to do it, whatever the risks. Priya and the player then went to find some silver so that Ben could craft a self-defense weapon for her. After Ben fashioned a silver knife and taught Priya how to defend herself, Priya approached Zander and asked him if she could join the pack. Zander agreed to take her to Annette and Priya told the player that she would see them soon.

After arresting Wyatt Ewing's killer, Priya called Luke and the player to reveal that she had discovered that novelist Arthur Darkwood was the one who had sent the team threats in order to convince them to stop looking into demons. Priya concluded that Arthur was a demon and his accomplice was Annette. Priya then mentioned that she had heard that Arthur had checked into the victim's bed and breakfast and wished the team good luck in their investigation into him.

Mid-investigation, Zander discovered that Priya had infiltrated the pack in order to relay information to the team and felt betrayed by her.

After arresting Annette Strong's killer, the player accompanied Priya as she tried to make amends with Zander. She explained that she had only infiltrated the pack because the team had discovered that the pack had made an alliance with demons. Zander told the team that Annette had only formed an alliance with Arthur, prompting Priya to inform him that Arthur was a demon. Zander later accepted Priya's apology and told her that if she could find Annette's book on the pack's history, it would go a long way towards the pack forgiving her. Priya and the player found the book in Annette's cabin and presented it to Zander, who thanked the team and promised that the pack would be more open with them in the future.

As the Chemist of the Supernatural Hunters, Priya has the responsibility of taking care of all the necessary physical, biological, and/or clinical analyses, and to inform the team of such results after a certain amount of time or a speed-up process using Criminal Case Cash. Her task-wait rates vary depending on the difficulty of the task, but they all cost 1 Criminal Case Cash per 30 minutes.

Below is the list of analyses Priya performs throughout the course of the game:

The player may choose Priya to join the investigation of each crime scene (in any case in Supernatural Investigations) and provide hint bonuses. She is available as a 3-hint partner. (This feature is only available in the mobile variant of Criminal Case) 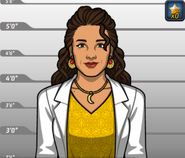 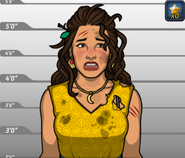 Priya, as she appeared in A One-Wolf Open Slay (Case #11 of Supernatural Investigations). 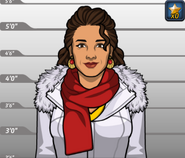 Priya, as she appeared in Winter Murderland (Case #14 of Supernatural Investigations). 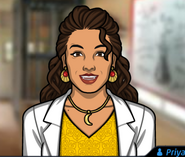 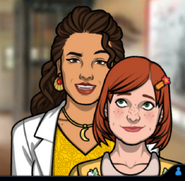 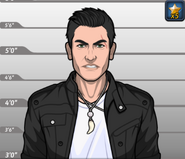 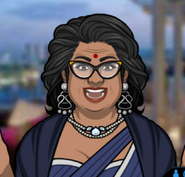 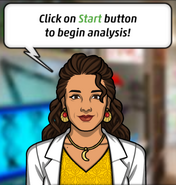 The player may choose Priya to join the investigation of each crime scene (in any Supernatural Investigations case) and provide hint bonuses. 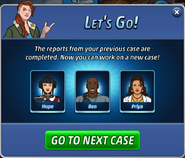 Priya fills in a report for the player.

Priya on "An Error Occured" pop-up.
Add a photo to this gallery