Prisha Chandra (Hin: प्रिशा चन्द्र) was the killer of skincare enterpreneur Beckett Blanton in Buzz Kill (Case #16 of The Conspiracy).

Prisha is the 28-year-old business partner of the victim. She has black hair adorned with a tie-dyed bandana and brown eyes concealed behind a pair of glasses. She wears a shirt with a tie-dye print under a white sweater. Additionally, she sports a Beckett's Bumblebees badge. It is known that Prisha has a coloring book, drinks kombucha and rides a bike.

Gloria and the player talked to Prisha after finding out that she ran the financial side of Beckett's Bumblebees. When they told her that Beckett was murdered, Prisha was shocked, stating that they had no rivals in the business. She also remarked that killing him would be useless as their company was well-established enough that it would run smoothly even without him. Prisha then left to begin handling the company all by herself.

Later, the team found romantic coupons given by Beckett to Prisha. Prisha clarified that the two of them were not together and that they only slept together once. However, Beckett got it into his head that they should be a real couple. Therefore, he tried several times to court her, even pretending to be her boyfriend to win her over. Prisha insisted that she did not want to mix business with pleasure, so she kept rejecting him. His latest attempt were the coupons, which he snuck into her bike bag when she refused them.

The team then found enough evidence to indict Prisha for the murder. When she admitted to the murder, Prisha said that it was an accident. She summoned Beckett to the rooftop in order to talk, but then they argued. When they were arguing, she started hitting him, and she eventually hit him hard enough that he stumbled into the beehive, releasing the bees that would give him thousands of stings. She then elaborated on their argument: she admitted that they were friends with benefits, but Beckett still thought they should be together. At one point, Beckett replaced her contraceptive pills with placebos in order to try to trick her into getting pregnant and forcing her into a relationship with him. Feeling violated, she summoned him to the rooftop to talk about his behavior. Judge Powell sentenced her to 5 years in prison, with eligibility for parole in 2 years. 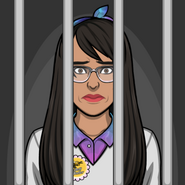 Prisha, sentenced to 5 years in prison with eligibility for parole in 2 years for the manslaughter of Beckett Blanton. 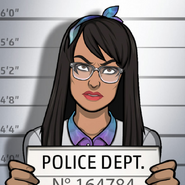 Retrieved from "https://criminalcasegame.fandom.com/wiki/Prisha_Chandra?oldid=464102"
Community content is available under CC-BY-SA unless otherwise noted.