Abioye is the 37-year-old Prince of Mazunda. He has black hair and a black mustache, dons black and gold clothing with a matching hat and wears a gold ring on his left pinky.

In his first appearance, it is revealed that Abioye speaks Afrikaans and goes yachting.

In his second appearance, he wears a tag around his neck with a badge of Mazunda. It is revealed that he eats maafe.

The team first arrived in South Africa in search for the prince, hoping to learn why SOMBRA was going after him. After a lot of searching, Jack and the player finally spoke to the prince after finding the tracking device his bodyguard was using. When informed of the attempt on his life, Abioye went into a panic since he thought he was safe. But before Jack could ask him why SOMBRA would be after him, he ran off again in a panic hoping to hide.

Later, he appeared when Jack and the player were discussing in the yachting club whether to trust the prince or not as he was hiding information. His bodyguard, Willem Nieuwoudt, came just in time and took a bullet to the shoulder after someone tried to shoot the prince there. Willem was then taken to the hospital.

Abioye was interrogated again after his dandruff was found on the victim's ID card. He said he did meet the victim, but it was only once when he was at a yacht party with Willem. He overheard her trying to sweet-talk Willem into giving her details about his schedule, but Willem did not fall for it. He decided to steal her ID to run a profile on, but he lost it in Soweto before anything could be done with it. Plus, he still refused to say anything about why SOMBRA could be after him. Jack and the player then put him in protective custody as his bodyguard was out of commission.

In the end, the Prince was found to be innocent after the team incarcerated Kwanele Mthembu for Kayla's murder. However, Jack and the player had to speak with him again to return his itinerary. To repay them, he finally decided to trust them enough to explain why he was being targeted by SOMBRA. According to Abioye, SOMBRA had been smuggling diamonds through his nation. He tried to fight it but SOMBRA retaliated, threatening his people. To protect his people, the Prince fled the country raising awareness around the continent of the smuggling. When asked about why Lavinia De Brills thought he knew something about her missing diamonds, he supposed she wanted to seek his expertise.

Abioye became a suspect again after Carmen and the player found the check he was going to reward the winner of the race. He said the people of his country begged for his return, so he did just that. When informed of the murder and the investigation into the diamond smuggling, he said he was aware of both but would not falter since presenting the award was important to his country. Since the player was there, he felt the killer and smugglers would finally be brought to justice.

Abioye was interrogated again regarding new saying he was being investigated for corruption. He said he had done things in the past he was not proud of, but he did it because his nation was a poor one. Plus, powerful men were paying the crown to ignore their illegal doings. But once Abioye saw the damage that was being done, he decided to fight the corruption and said that the news was being printed because those criminals see him as a threat. Carmen had trouble believing him since he lied to them, but the Prince was adamant when he said he had nothing to do with this murder or the ones behind it.

His words proved to be true as Abioye was found to be innocent again after the team incarcerated Lavinia De Brills for Nomena Leroy's murder and for smuggling diamonds. 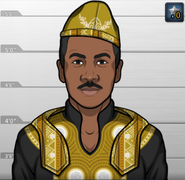 Abioye, as he appeared in Kicking the Bucket (Case #39 of World Edition). 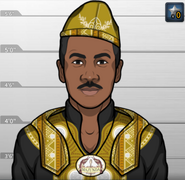 Abioye, as he appeared in Going the Distance (Case #41 of World Edition). 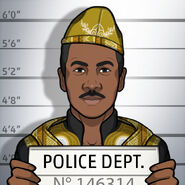 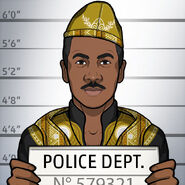 Retrieved from "https://criminalcasegame.fandom.com/wiki/Prince_Abioye?oldid=503601"
Community content is available under CC-BY-SA unless otherwise noted.