Poppy Winters was the killer of farmer Wyatt Ewing in Winter Murderland (Case #14 of Supernatural Investigations).

Poppy is a 24-year-old shopkeeper. She has green eyes and blonde hair with red and orange streaks braided to the length of her chest. She wears a black top with green tartan sleeves and a matching right front pocket, as well as a maroon skirt and a pair of orange goggles around her head. She also sports two piercings on her cheeks and multiple tattoos, including two lake monster tattoos and a heart tattoo above her chest, two leaf tattoos on the both sides of her neck, along with two other tattoos on her shoulders. It is known that Poppy eats lakeweed, goes underwater fishing and has watched Ridgeback Mountain.

Poppy became a suspect after Luke and the player found a lake monster plushie from her shop at the victim's ranch. When the team revealed that they wanted to talk about the murder, Poppy assumed that they wanted to pin it on Hannah, the lake monster. When asked if she knew anyone who had a beef with the victim, she told them that he was a regular guy who minded his own business. She then urged the team to find the killer quickly.

Poppy was spoken to again about the victim owing her. She informed the team that Wyatt had ordered a large quantity of lake monster memorabilia to sell to the guests at his ranch, but he never paid for them. She questioned why her business had to suffer because the victim was unable to peddle his goods.

In the end, it was proven that Poppy was Wyatt's killer. She said that Wyatt had wanted to drain Roundhead Lake, which was in his property, so he could grow more crops. Worried that it would kill Hannah, Poppy tried to dissuade him from pushing through with his plan, which did not work. To save Hannah, Poppy stabbed Wyatt in the neck with a trident. The team then took Poppy to the authorities before informing the townspeople of her crime. 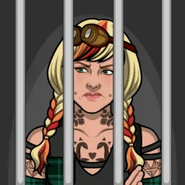 Poppy, taken to the authorities for the murder of Wyatt Ewing.
Add a photo to this gallery

Retrieved from "https://criminalcasegame.fandom.com/wiki/Poppy_Winters?oldid=522598"
Community content is available under CC-BY-SA unless otherwise noted.