Jack Archer (Chapters 1‒3)
Marina Romanova (1 task in Chapter 2)
Angela Douglas & Carmen Martinez (A New Light 3)
Plagued by Death is a case featured in Criminal Case as the one-hundred and thirty-sixth case of the game. It is the twenty-first case of the game's World Edition (Season 3) and also the third case to take place in South Asia.

The Bureau went to Bangalore after the city asked for assistance from Angela and Lars with a sudden epidemic. Lars asked Jack and the player to retrieve a dead body found in the Shiva Temple, which was of science student and intern Sunil Dhudwar. There, the player deduced from a puncture mark on his hand that he was murdered, instead of not being infected with the virus.

Soon, the investigation revealed that the virus was man-made and that Sunil was the first person to be infected, with the virus spreading from him. It also revealed that university teacher Dr Shweta Noorani created the virus with help from Sunil. Dr Noorani said that she made the super-virus by isolating the most dangerous parts of Dracoxia, an experimental drug made by the mysterious medical firm O.M. MediLab. She also said that the firm tried to bribe her to experiment and release the virus a year prior to the events of the case. Lars was infected mid-investigation and had to be sent to the infirmary. With the stakes even higher, the team arrested sociology professor Ayush Patil for the murder.

Ayush initially denied involvement but eventually admitted that he killed Sunil and hundreds of other people to solve overpopulation. Ayush also admitted to the team that he did not bother to find a cure because his mission was complete. For the remorseless killing of hundreds of people, Judge Adaku issued Ayush a lifetime jail sentence.

Angela and the player found a broken vial in Jayamahal University. Upon further analysis, Angela said that the blood on the vial came from an immune person. Angela confronted Dr Noorani, suspecting that she was hiding the blood but she said that she only dropped it and that she wanted to test on the plant Gloriosa superba next. Angela and the player found the plant in the botanical gardens.

Carmen went with the player to the Shiva Temple as Jack wanted to sit by Lars's side. They found Averly Worthington's laptop. Elliot analyzed it and found out that Averly had been donating money to Guru Om Padmasana. Averly said that she willingly donated as the guru helped her get "cleansed by the flashing light". They then interrogated the guru who insisted that he was only accepting voluntary donations.

Angela synthesized the cure and used it to cure Lars. Angela and the player gave the cure to Warren Goodfellow so he could distribute the cure to the population. He also decided to cut the organization's ties with O.M. MediLab per Angela's advice.

Elliot said that Angela had confiscated all samples of the virus so O.M. MediLab would not get their hands on the supervirus. He also said that he could not track down the medical firm. Lars said that he had taken an interest in Padmasana's book. Jack, not wanting the guru in Lars's life, suggested a trip to Bollywood instead to relax. Chief Ripley agreed with Jack about needing a vacation so the team went to Bollywood.

Warren Goodfellow
Add a photo to this gallery

Om Padmasana
Add a photo to this gallery 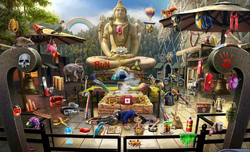 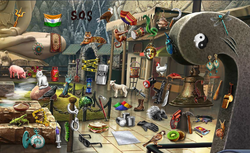 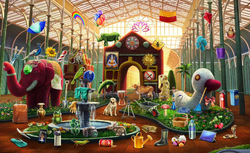 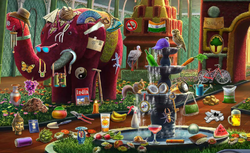 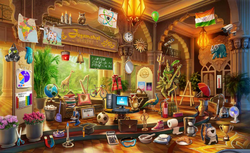 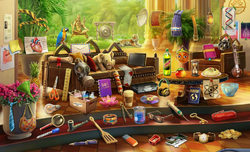 Entrance Hall
Add a photo to this gallery

Retrieved from "https://criminalcasegame.fandom.com/wiki/Plagued_by_Death?oldid=544322"
Community content is available under CC-BY-SA unless otherwise noted.