Pippa Goldfinch was a suspect in the murder investigations of former Grimsborough PD coroner Nathan Pandit in Snake in the Grass (Case #1 of The Conspiracy) and high school senior Vicky Lopez in Too Cruel for School (Case #5 of The Conspiracy).

Pippa is a 45-year-old science teacher at Fairview High School. She has brown hair in dreadlocks and sports caramel glasses. She wears a white cardigan with a black ribbon over a light blue shirt. She also wears small blue earrings. Additionally, she is seen holding a yellow and black book that says "BIOLOGY FOR SCHMUCKS".

In her first appearance, Pippa wears an apple badge saying "BEST TEACHER" on her cardigan. Furthermore, it is known that Pippa reads The Jungle Book and uses multicolored chalks.

In her second appearance, she wears a red-and-white FHS badge on her cardigan. Moreover, it is discovered that she supports the Grim Badgers.

Pippa became a suspect after Jones and the player found her handbag in the Mighty Zooniverse terrarium. When interrogated, she said that she was a science teacher at Fairview High School and was at the zoo early so she could ensure that everything was going well for the field trip she had planned for her students.

Pippa was spoken to again about an anonymous note from her in the zoo's commentary book demanding to have Nathan fired. When asked about it, she said that on her last school outing to the zoo, Nathan got his girlfriend to teach students how to handle the snakes, even letting the students touch them. Consequently, she got into trouble with the kids' parents and almost lost her job due to Nathan's reckless behavior.

Pippa was found to be innocent when the team incarcerated Kit Partridge for Nathan's murder.

Pippa became a suspect again after she alerted Gloria and the player to the murder in her classroom. When questioned about the victim, she told them that Vicky had arrived at the school during the previous semester and was quite intelligent. However, she berated the victim for entering the lab without supervision, which was against the rules.

Pippa was spoken to again about a harsh note she had written on one of the victim's essays. After attempting to report two students for littering, she revealed that the victim's essay was a thinly disguised insult based on the fact that she had made a mistake in class, which Vicky gleefully corrected. After Gloria questioned Pippa's motives, she told them that she wasn't the only teacher who was displeased with Vicky and threw Coach Kirk under the bus.

Pippa was found to be innocent again after the team incarcerated Coach Kirk for Vicky's murder. 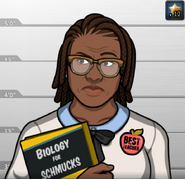 Pippa, as she appeared in Snake in the Grass (Case #1 of The Conspiracy). 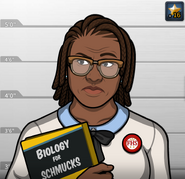 Pippa, as she appeared in Too Cruel for School (Case #5 of The Conspiracy). 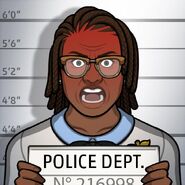 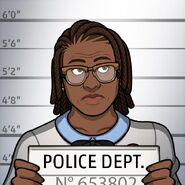 Retrieved from "https://criminalcasegame.fandom.com/wiki/Pippa_Goldfinch?oldid=467061"
Community content is available under CC-BY-SA unless otherwise noted.