Piper Ash, appearing as a minor character in Criminal Case, was mentioned during the events of Murder on the Dance Floor (Case #15 of The Conspiracy).

Piper had blonde hair tied up in a ponytail with a pink ribbon, and brown eyes. She wore a red patterned tank top with purple linings and a multicolored bead necklace. She also wore pink eyeshadow.

Upon arresting Piper's sister, Robyn, for the murder of DJ Kalua Kaboom, Robyn explained that when she had hired Kalua to play at her 21st birthday party, she made her promise not to use strobe lighting during the party because Piper suffered from epilepsy. During the party, however, Kalua broke her promise, inducing a fatal seizure from Piper. With her sister's death being ruled as an accident and without money to file a case against Kalua, Robyn decided to exact revenge by killing her instead. 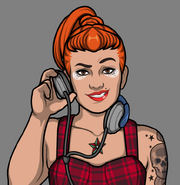 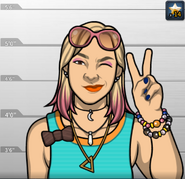 Robyn Ash, Piper's sister.
Add a photo to this gallery

Retrieved from "https://criminalcasegame.fandom.com/wiki/Piper_Ash?oldid=408781"
Community content is available under CC-BY-SA unless otherwise noted.