Pierce is a 169-year-old vampire and Gwen's boyfriend. He has black eyes and short, slicked-back black hair. He sports black eyeshadow, a silver nose ring through his left nostril, and is seen holding a cigarette in his lips. He wears a maroon shirt with the sleeves cut off and a black rose emblazoned on the front under a black, sleeveless leather vest with silver studs. Additionally, he sports a silver necklace, a black cobweb tattoo on his neck, and a snake tattoo on his right arm.

In his first suspect appearance, it is known that Pierce knows werewolf lore and is an insomniac.

In his second suspect appearance, it is discovered that he drinks deer blood, knows ballroom dancing and uses Eternal Youth moisturizer.

In To Hell and Back, Pierce wore a formal white shirt with the sleeves rolled up under a black waistcoat and a matching bowtie.

After arresting Lucy Winters' killer, Gwen told the player that she had seen someone during the investigation who had caught her eye. At the crypt party, they found the skull badge that Gwen had seen her crush wearing. Per Ben, suspected vampire Roxanne Vega had come into contact with the badge. This prompted Gwen and the player to see if Roxanne was dating Gwen's crush. After identifying the mystery man as Pierce, Roxanne scoffed when she realized that the team thought that she was dating him. She then agreed to set Gwen up with Pierce.

Later, at the cemetery, Gwen and the player found a box with Gwen's name on it. They found an orchid inside the box; soon after, Pierce appeared and took Gwen on a date. At the end of the investigation, Gwen told the team that Pierce was everything she had dreamed of and revealed that they were meant to be.

After arresting a bigfoot's killer, Gwen and the player encountered vampire Fabien de la Mort during their search for missing teenager Mina Reynolds. During his interrogation, Fabien brought up Pierce, telling the team that he had mentioned Gwen during their gatherings at US vampire coven leader Dr Aculus' mansion. This led Gwen to realize that Pierce was a vampire, shocking her.

At the end of the investigation, Gwen revealed to the team that she had broken off her relationship with Pierce.

Pierce became a suspect after Gwen and the player found his vest at the werewolf hideout. After Gwen rejected Pierce's invitation to Dr Aculus' upcoming vampire ball, she told him about the murder. Shocked to learn about the identity of the victim, Pierce revealed that he used to hang out with Danny and werewolf Zander Stark, and commiserated Danny's death.

Pierce was spoken to again about him disabling the security camera at the crime scene. He revealed that he used to tease Danny about how being a werewolf was easier than being a vampire. Annoyed, the victim invited Pierce to see what happened when the werewolves unwillingly transformed at full moon. Since he did not want there to be evidence of him being at the prison, Pierce disabled the security camera. When he saw Danny transform, Pierce freaked out and ran away.

Pierce was found to be innocent after the team incarcerated Serena Kwame for Danny's murder.

Prior to the case, Pierce invited Gwen to Dr Aculus' deathday ball. Pierce then became a suspect again after he ran into Gwen and the player at the crime scene. After Gwen reminded Pierce that they were no longer together, he told the team that if he knew who had killed Dr Aculus, he would have ripped their head off. He then told the team that he had faith that they would solve the murder, and suggested that they looked for clues in the mansion garden.

Mid-investigation, vampire Bathsheba approached the team and savagely bit Gwen. After Gwen brandished a wooden stake at her attacker, Pierce pleaded with Gwen and promised that he would keep Bathsheba under control. Ben put Gwen on bed rest, telling the team that she had not been turned into a vampire. Luke assumed the role of the player's partner.

Pierce was spoken to again about his plan that Dr Aculus had not approved of. He admitted that he had told Dr Aculus about his plan to seduce Gwen at the ball. However, Aculus told him that theirs was an ill-fated romance, annoying him.

Pierce was found to be innocent again after the team incarcerated Eric Zwart for Dr Aculus' murder. Later, Pierce told the player that he wanted to check up on Gwen. After Gwen reminded him that they were over, he asked her for a dance back at the mansion.

Once Gwen (per Priya) found a suitable dress, she joined Pierce for a dance. However, when he saw her blood, he tried to bite her. Gwen brushed him off and explained that she would never feel safe around him. Reluctantly, Pierce admitted that she was right and told her to take care of herself, officially breaking their relationship off.

After discovering the identity of Dolores Harper's killer, Gwen's sister, Tilly Harper, and the player found Dolores' diary in Gwen's bedroom. After the player unlocked it, Pierce appeared, introducing himself to Tilly. He explained that he had sensed that Gwen needed a shoulder to cry on and he was unable to stay away. After giving the diary to Felix, Felix mentioned Pierce's attempt to bite Gwen, outraging Tilly, who had not been told that Pierce was a vampire.

Later, Gwen and the player went to the swamp to pay their respects to Dolores. There, Pierce appeared and told Gwen that he was still in love with her. Gwen worried about him being out in the sun, but he told her that he would do anything for her. After Gwen told him that she missed him too, the two kissed. However, their embrace was disturbed by swamp monster Gregg, who lamented on the fact that his girlfriend was missing. Gwen decided to help Gregg find his girlfriend, resulting in Gwen, Pierce and the player learning that there was an urgent supernatural meeting being held in Mississippi. After telling Gregg that his girlfriend had gone to the meeting, Pierce advised him to pay more attention to his girlfriend. Pierce then told Gwen that he would be there for her whenever she needed him.

Two months after defeating the demon queen, Gwen and Pierce revealed that they had made their relationship official. Pierce accompanied Gwen to Priya and Zander's wedding in Paris. 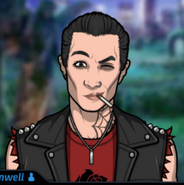 Pierce, as he appeared in Blood Lust (Case #1 of Supernatural Investigations). 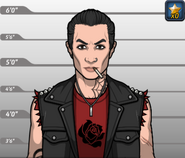 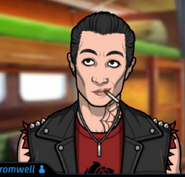 Pierce, as he appeared in The Hunted Hunter (Case #28 of Supernatural Investigations).

Pierce, as he appeared in To Hell and Back (Case #30 of Supernatural Investigations). 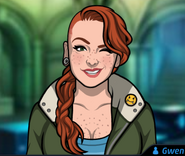 Gwen Harper, Pierce's girlfriend.
Add a photo to this gallery

Retrieved from "https://criminalcasegame.fandom.com/wiki/Pierce_Cromwell?oldid=536343"
Community content is available under CC-BY-SA unless otherwise noted.