Philip Rockwell was a suspect in the murder investigation of intern Gail Harding in Innocence Lost (Case #19 of Grimsborough).

Philip is a 30-year old executive in Greene Financial who has tidy brown hair. He wears a white shirt and a plum tie underneath a black suit with the Greene Holdings' badge on the left side of his suit. It is known that Philip drinks energy drinks.

Philip wanted to talk to Jones and the player about the victim, Gail Harding. When the team asked him what he wanted to say, Philip said that he was saddened by the death of Gail and that he was in regular contact with her since she was writing an article on Greene Holdings. He told the team to interrogate Derek Molina as the latter was quite close to Gail. He also suggested that Derek's drug habit was something that the team would find worthy of interest. This led the team to go and talk to Derek about his drug habit. 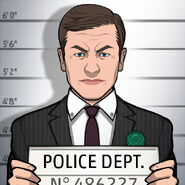 Retrieved from "https://criminalcasegame.fandom.com/wiki/Philip_Rockwell?oldid=408750"
Community content is available under CC-BY-SA unless otherwise noted.