The Murder of Mrs Stanbury (s4)

Percy Stanbury was the killer of his wife, young woman Victoria Stanbury, in The Murder of Mrs Stanbury (Criminal Case: Mysteries of the Past-exclusive).

Percy is the 35-year-old husband of the victim. He has brown eyes, along with short, brown, tousled hair and a mustache. He is seen wearing a black blazer with a gold designed collar over a beige shirt with a matching ascot. Additionally, his blazer has a blue blazon on his left lapel with a silver border and a silver "S" on the front. It is known that Percy is right-handed.

Percy was outed as the killer of his wife, Victoria. He was discovered to have slashed her throat before leaving her to die at Liberty Island. Percy's motive and jail time for killing Victoria was never specified. 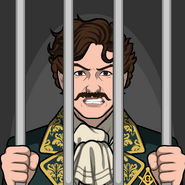 Percy, sentenced to an undisclosed amount of time in jail for the murder of Victoria Stanbury. 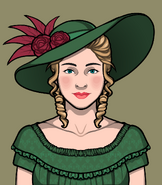 Retrieved from "https://criminalcasegame.fandom.com/wiki/Percy_Stanbury?oldid=467584"
Community content is available under CC-BY-SA unless otherwise noted.