Penny Farrell was the victim in Bone of Contention (Case #26 of The Conspiracy).

Penny was the assistant to Mayor Martha Price. She had curly brown hair and brown eyes. At the time of her death, she wore a white shirt under a purple blazer, a grey skirt and grey high heels.

Later, Gloria and the player discovered a bloody dog leash inside a trash can in the murder scene, which they sent to Rupert who confirmed it as the weapon used to strangle Penny. He also looked closely at the ends of the leash and found traces of a sterile non-iodized saline solution made for cleaning gold jewelry. It meant the killer wore gold jewelry.

Penny infuriated her boss, Mayor Martha Price, by neglecting her mayoral assistant duties and browsing dog videos instead. Penny also accused dog shelter owner Carlos Cachorro of not giving the dogs in his shelter their proper vaccinations when Carlos claimed to just have forgotten to give the vaccinations to the dogs. Faded Ivywood star Celine Dernier also believed the victim was condescending when the former reported the numerous puppy disappearances across Maple Heights. Penny also criticized dog walker Kitty Young's dog care methods, claiming that she would've done better than Kitty, despite the latter having years of experience. Penny also broke up with her boyfriend, Benjamin Fetcher, after he tried to convince her to return her dog back and have a live rat as a pet instead.

The killer turned out to be Kitty.

After slipping up, Kitty admitted that she occasionally kidnapped dogs and waited for their owners to offer a reward before returning them in order to make more money. When Penny found out and confronted her about her modus operandi, they had a fight, ultimately ending with Kitty knocking Penny out and strangling her with a dog leash. Judge Powell sentenced her to 15 years in prison. 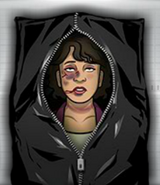 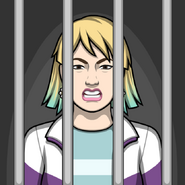 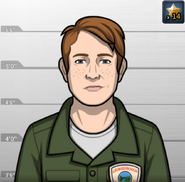 Benjamin Fetcher, Penny's ex-boyfriend.
Add a photo to this gallery

Retrieved from "https://criminalcasegame.fandom.com/wiki/Penny_Farrell?oldid=505186"
Community content is available under CC-BY-SA unless otherwise noted.