Penelope is a 23-year-old civilian protesting against the government. She has her shoulder-length black hair tied into several braids. She wears a black visor with the words "EAT THE RICH" imprinted on it and a pair of red sunglasses on her head. She dons a red tank top filled with the text "HATE" over it and pins a "NO" badge onto her right. She is also seen wearing a bead necklace. It is known that Penelope knows Greek mythology and eats olives.

Penelope was interrogated after Jack and the player identified her in her violent protest on a magazine cover. She celebrated in joy after hearing the news that Metaxas was assassinated, which disgusted Jack. She said she was infuriated when Metaxas sold the country to greedy bankers, and she wanted to do something about it. Jack offered to counsel her whenever she needed it, but she rejected it.

Penelope was interrogated again after her birth certificate revealed that she was Metaxas's daughter. She confirmed it and tried to hide her identity by changing her name and destroying the certificate. She wanted a real father who would spend time with her and care for the family, but Metaxas carried none of the traits―he only wanted money and status. She opened up to the player and said that her life was about rebelling against her father, and would not be the same again now that he is dead.

Penelope was found innocent after the murderer was revealed to be Metaxas's own economic advisor, Nikolaos Costas. However, Jack and the player wanted clarification after they found her saliva on a "YES" campaign cap, which was under a stash of counterfeit money, at the cave. She admitted that she stole the money from a greedy English banker and was not ashamed of it, saying it was a redistribution of wealth. She recounted that she hid at the cave and met a strange man in a monk's robe. She thought that he was on the same boat as her, but she found out that he was a "YES" campaigner attempting to bribe people into voting "YES" in the referendum. She told him that she did not steal the money to fund the campaign and spat on the cap that he gave. Interested, Jack asked Penelope how the monk looked like. Penelope said that the monk was Brother Klaus, and he talked about the Promethians. She added that Klaus wanted the money so he and the Promethians could bribe everyone in Europe to vote "YES", though he disappeared the day after. Jack realized that Klaus was indeed in Greece, but was disappointed that he escaped. 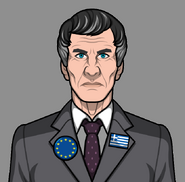 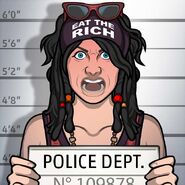 Retrieved from "https://criminalcasegame.fandom.com/wiki/Penelope_the_Rebel?oldid=408727"
Community content is available under CC-BY-SA unless otherwise noted.