High Priest Pelagios (Grk: Πελάγιος) was the victim in A Greek Tragedy (Case #4 of Travel in Time).

Pelagios was a Greek High Priest. He had long light brown hair, green eyes and a light brown beard tied up. At the time of his death, he wore a white toga and strappy sandals. Additionally, he sported a gold necklace around his neck and a brown wooden hair wreath.

Pelagios' body was found on the stairway on Mount Olympus, with an arrow shot to the chest and another bloody broken arrow next to the body. After collecting some substances left in the broken arrow, the team gave them to Janis for analysis. After analyzing, Janis was able to conclude that the substance was yoghurt. She also found other ingredients to make tzatziki in the substance, including garlic, olive oil, and cucumber; meaning that the killer ate tzatziki.

Zara and the team later found a bow in the temple of Zeus' garden. Theo then managed to conclude that the bow was used by the killer to kill Pelagios. Not only that, he also found a bit of the killer's clothes pinched between the string and the nock of the bow. After finding out that the threads were woven into a visual pattern called a "meander", Theo was able to confirm that the killer had worn this pattern on their clothing.

Pelagios held a long-standing rivalry with doctor Theophilos due to their conflicting beliefs over science and religion. Their rivalry culminated when Pelagios' disbelief in medical science resulted in the deaths of many when a disease ran rampant in town, prompting Theophilos to destroy a bas-relief at the temple. Priestess Euterpe worked with Pelagios at the temple, but he felt threatened about her potency, prompting him to curse her with an evil eye pendant. Model Solon enraged the victim with his claim that he was a demi-god. Pelagios also tried to exploit the pregnancy of his wife, Zosime, by claiming that their unborn baby was the miracle boy of Zeus. Additionally, General Mark Antony used Pelagios as a medium to consult Zeus and was unhappy when he suggested that things would not go to his liking.

The killer turned out to be Zosime.

Zosime told the team that Pelagios was planning to force her to have an abortion when she was informed that their baby would be a girl. Not wanting to lose her baby, Zosime shot Pelagios with a poisoned arrow. The city guard allowed Zosime not to be banished from the city as she was "carrying the miracle boy of Zeus" but Zosime chose to accept her punishment instead to live with some of her family in Agapelpida. 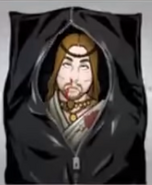 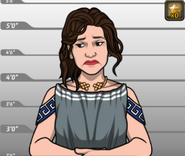 Zosime, Pelagios' wife and killer.
Add a photo to this gallery

Retrieved from "https://criminalcasegame.fandom.com/wiki/Pelagios?oldid=495203"
Community content is available under CC-BY-SA unless otherwise noted.