Peggy Pascal (1988–2014) was a suspect in the murder investigations of local weatherman Clifford Grady in Cloudy with a Chance of Murder (Case #19 of Pacific Bay) and thief Theo Mercier in Under the Thunderdome (Case #21 of Pacific Bay). Later, Peggy was found electrocuted to death in The Eye of the Storm (Case #23 of Pacific Bay).

Peggy was a 26-year-old stormchaser with ginger hair. She wore a pair of cracked black, circular glasses, and donned a black t-shirt underneath a denim vest. On the right side of her vest, she donned a badge representing a tornado.

In her first appearance, she wore a necklace depicting a weather vane. It is known that Peggy had a cat, knew French and ate Cajun food.

In her second appearance, she replaced her necklace with a "Jazz Town Evacuation" badge, and she had a mud stain on the right side of her vest. It is discovered that she drank chicory and uses insect repellent.

Peggy found herself in trouble when Amy and the player found an anemometer with a message directed towards local weatherman Clifford Grady about Hurricane Yves, in which she told both officers she used the anemometer to predict the disaster. Amy felt Peggy's storm-chasing agenda had nothing to do with Clifford's death, but when Peggy was told about Clifford's death, Peggy struggled to reason with Clifford to warn Jazz Town about Hurricane Yves but Clifford would not listen to her.

Peggy would be approached by Amy and the player for a second time upon Hannah suggesting to the team Hurricane Yves was possibly a man-made storm. Amy wanted to know whether or not Peggy made up the story in which Peggy spent tedious hours studying for reasons as to why Hurricane Yves was not on Clifford's barometer--Peggy made good on her predictions that Hurricane Yves was a man-made storm so the disaster was not present for Clifford to forecast since weather personnel only had a forecast of natural causes of God. Amy refused to believe this was true as there was no scientific proof of Yves being a man-made disaster but Peggy had to remind the team about her reasoning with Clifford about Hurricane Yves in spite of her being ignored.

Peggy was safe when Marie Bordeaux was impounded for grand homicide, but Hannah was so fascinated about Peggy's talent that she decided to check up on her after the arrest to investigate the truth behind Hurricane Yves.

Peggy found herself in trouble after Amy and the player found a defaced radar dish confirmed by Hannah to be Peggy's property. Peggy wrote a message on the defaced radar dish since Theo gave her what she believed to be a lemon in which she accused Theo of conducting dishonest business. Peggy required a radar dish to help her monitor storms (like hurricanes) since she did not want an incident like Hurricane Yves to occur.

Peggy was due for a second conversation after she went to Amy and the player with fears that the military was after her about her endeavor to leak the weather machine project. Amy told Peggy to calm down and to wait for her and the player in the interrogation room.

Amy demanded proof as to why the military would create man-made storms with a weather machine but Peggy wanted Theo to sell the classified military document for cold hard cash. Peggy did not like that Theo refused to sell her the military document in exchange for the faulty radar dish--something Peggy needed to rebuild her reputation as a storm chaser.

Peggy was found innocent for a second time after Claude Lamothe was indicted for grand homicide, but was in trouble once again after Colonel Spangler suspected her of unlawful use of a military laptop for the sole purpose of gaining knowledge to the military's storm-making project.

As Hurricane Zelda approached Jazz Town, Amy and the player found Peggy tied to a weather tower with metallic wire, electrocuted by lightning. Beside her, they found a message implicating her killer to be the storm's creator. They sent her body to Roxie, who confirmed electrocution as the murder weapon, as evidenced by the burn marks and the use of metallic wire. Roxie also noted that Peggy was knocked unconscious by a hit to the head, most likely with a teapot. This meant that the killer drank tea.

Spangler disliked Peggy for trying to put an end to the weather project, his greatest achievement. Eco-activist Rose Field also did not want Peggy to prove that hurricanes were man-made, fearing that big companies would use the same excuse to get away with pollution. Peggy had tried getting Veronica Blade to evacuate her house, but she refused, partly because she hated Peggy for disproving that Hurricane Yves was responsible for damaging her estate, and so Veronica could not claim her insurance money. Peggy was also close to her uncle, fellow stormchaser Andy Pascal, before she had the Stormchaser Association revoke his license, claiming he was more interested in the adrenaline than science.

The killer turned out to be Veronica.

Veronica was trapped in her ancestral home as it was protected property, but could not fix her home as her family was broke and the city refused to give aid. After finding the weather machine, she stole it and created Hurricane Yves to destroy her house and collect the insurance money. When Peggy blocked her from claiming the insurance money, Veronica created Hurricane Zelda to fully demolish Jazz Town and bring it back to "how her ancestors found it", and then killed Peggy to exact her revenge.

Judge Dante then sentenced Veronica to life in prison for the murder of Peggy Pascal and for the deaths and destruction caused by Hurricanes Yves and Zelda. 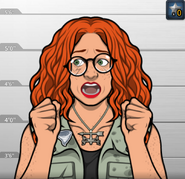 Peggy, as she appeared in Cloudy with a Chance of Murder (Case #19 of Pacific Bay). 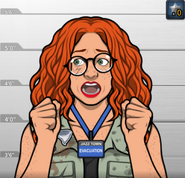 Peggy, as she appeared in Under the Thunderdome (Case #21 of Pacific Bay). 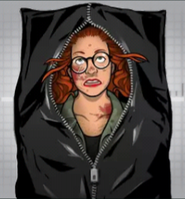 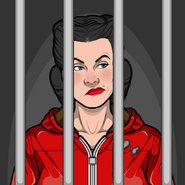 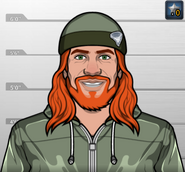 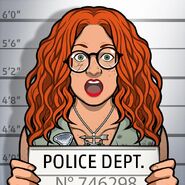 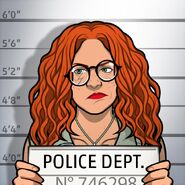 Retrieved from "https://criminalcasegame.fandom.com/wiki/Peggy_Pascal?oldid=491919"
Community content is available under CC-BY-SA unless otherwise noted.