Pedro Torres was a suspect in the murder investigation of President Adolfo Herrera of Luzaguay in Shadow Nation (Case #45 of World Edition).

Pedro is the 28-year-old head of the Luzaguay militia. He has a bald head and gold earrings and black mutton chops, and his body is covered in many tattoos. He dons a black bulletproof vest, wears a necklace, and has a rifle strapped over his back. It is known that Pedro has military training, takes Gabalium, and knows the Luzaguayan Constitution.

Pedro became a suspect after the player and Carmen found a coat of arms for his militia on the rooftop the killer shot the president from. He felt Adolfo was an admirable man, a ruler who saw that the country was destined for greatness. When informed of his murder, he became furious saying whoever did this made an attack against the nation as a whole, and the killer would be found and dealt with. When Carmen asked what the militia would do, he said they had a mandate from the government to do whatever was necessary.

Later, they had to save Pedro from Sebastian Morales, the leader of the rebels who captured him. After managing to save him, they asked him why he went to the rebel camp in the first place. Pedro explained he went to the camp because the victim was planning to disband the militia, saying they were getting too out of hand. Despite his complaints, the victim refused to deter; when Carmen suggested that he killed him to protect the militia, he said he did not but would not deny the convenient power vacuum made from his murder. It was for that reason he approached Sebastian, in hopes that the rebels would be interested in making a new order with the militia.

Pedro was later found innocent after the team incarcerated Valentina Silva for Adolfo's murder. But he was spoken to again regarding the location of a little girl named Constanza Reyes, who he and the militia took from the rebel camp. He said the militia took her because the camp was no place for a girl, and he admitted to catching her at the surveillance post a few times, and that she seemed to be looking for something. Despite telling her she might get in trouble for it, she kept going there anyway, and thought they might find her there. This prompted the team to search the surveillance post in hopes of finding Constanza. 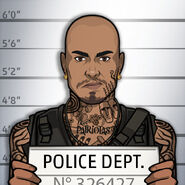 Retrieved from "https://criminalcasegame.fandom.com/wiki/Pedro_Torres?oldid=461814"
Community content is available under CC-BY-SA unless otherwise noted.