Pearl Montana was a suspect in the murder investigation of her ex-husband, archaeologist Burt Montana, in Temple of Doom (Case #40 of Pacific Bay) and the killer of US Army Colonel Spangler in The Ties That Bind (Case #44 of Pacific Bay).

Pearl is a 31-year-old blonde-haired adventurer/archaeologist with blue eyes. She is seen wearing an olive green shirt with many archaeological instruments, a tan striped bandana around her neck, and gold earrings.

In her first appearance, she has a sunburn. It is known that Pearl eats red chili peppers and knows Aztec and astronomy.

In her second appearance, her sunburn is gone, she has scorches on her right shoulder and wears sunglasses with a spotted frame. It is discovered that she wears army boots and does spelunking.

Pearl was called into the investigation after Amy and the player found an old photograph of Burt and herself in Burt's office. The player had to confirm the female as being Pearl before the conversation started as Amy was not sure whether or not it was Pearl. Pearl did not like any time-wasting conversations, but Amy had to inform her that Burt was dead. Pearl told the team that she and Burt were in the midst of a divorce due to an inner competition between the couple for the title of the finest archaeologist in the world. Pearl was also upset by Amy and the player presenting her a pic of Burt and herself during the conversation.

Pearl would be approached by Amy and the player for a second conversation after the team found her map to the temple in the Aztec Temple. Pearl was aghast to know that the team made it to the Aztec Temple before she did, to which Pearl blamed Burt for stealing her map from him so that he would be the first one to reach the Aztec Temple. Pearl would then go back to as far as her college years on how she met Burt, and knowing throughout her years she saw Burt as a thief of sorts. Pearl did not like Burt's controlling attitude, which explained why she opted to file for a divorce.

Pearl was a strong suspect due to her grudge against Burt, but was found innocent of murder after Judge Dante's court service ensued.

Pearl was interrogated once again when Frank and the player found her graduation photo in a fish trap, along with words thanking Colonel Spangler. Pearl claimed that Spangler was the reason she became an archaeologist. Her parents had sent her to an army summer camp when she was sixteen where she had met the colonel, who asked for her help to find a lost Inca artifact that was possibly of alien origin. Pearl went on to say that she had found archaeology boring until Spangler showed her how adventurous the job was. She had mentioned that she had learned spelunking and to always wear army boots as it lessened her chances of her feet getting crushed. When told that the colonel had been murdered, Pearl was in shock and requested the player to find his killer or she would avenge him herself.

Pearl was approached again when the team pieced back a photo of Spangler with flames added on to it by the archaeologist herself, telling him it was his turn to burn. She explained that she was upset when the colonel denied her access to the alien cave as it would have been her big break; she claimed that the colonel wanted the cave as an asset for army research and development. When questioned as to whether she had murdered Spangler after sending an angry threat, she continued to claim that she was just upset and that she would not have hurt him.

Pearl was found guilty of Colonel Spangler's death after evidence pointed her out as the killer.

Pearl had many reasons to be thankful for Colonel Spangler for teaching her the many aspects of archaeology, allowing her to embark on a quest to discover alien life in Pacific Bay. She believed that she was the one who crossed the finish line when it came to the discovery of an alien cave, but to Spangler, orders were orders as he had to quarantine the cave out of civilian reach. Spangler told Pearl to keep her discoveries secret, but Pearl had enough because she believed the Colonel wanted to take credit for the discovery, in which she discovered the cave moments before Spangler barricaded the cave. Pearl thought that Frank and the player made a false arrest, but after Frank gave out the Killer's attributes to Pearl, she bowed to the player's investigative abilities, admitting that she killed Spangler. Pearl caught Spangler by surprise, tied him up with spelunking harnesses, and threw a homemade Molotov cocktail (with a flammable liquid made to treat earring wounds) to off Spangler with an explosion. Pearl used the hippie festival that promoted using flames, so that she could have the team believe Ezra Hope landed the wallop. Frank heard enough, so the player shipped Pearl to court for a hearing.

Judge Dante thought Pearl killed Spangler for crimes against fashion, but Pearl told the judge that Spangler's appearance had nothing to do with the murder. She told the judge that if Spangler wasn't involved, then she would be the one to be credited for her discovery of alien life on Earth. Pearl even told Judge Dante that she should be written in the history books for her discoveries, but given the motives, not to mention being liable for the death of a military official were grounds for Pearl to receive a lifetime jail sentence. Frank was relieved to know the verdict of the case, and felt that Spangler was more of anti-hero than an antagonist as even though Spangler obstructed justice at times, he died wanting to redeem himself to the team. 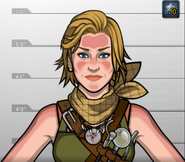 Pearl, as she appeared in Temple of Doom (Case #40 of Pacific Bay). 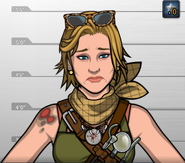 Pearl, as she appeared in The Ties That Bind (Case #44 of Pacific Bay). 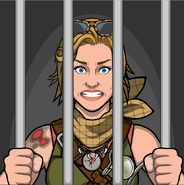 Pearl, sentenced to life in jail for the murder of a US Military Official and for wanton defiance of US Military Sanctions. 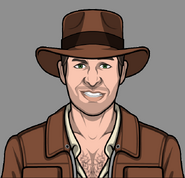 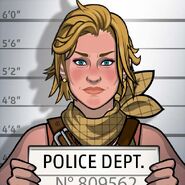 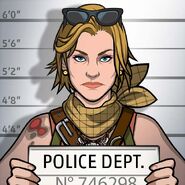 Retrieved from "https://criminalcasegame.fandom.com/wiki/Pearl_Montana?oldid=434614"
Community content is available under CC-BY-SA unless otherwise noted.