Father Paul Sheppard was a suspect in the murder investigations of four people in The Conspiracy.

Paul is a 36-year-old priest with shaved head and black eyes. He is seen wearing a black cassock underneath a white priest robe and a light purple stole emblazoned with two yellow crosses.

In his first appearance, it is known that Paul drinks switchel, has a pickup truck and uses sunscreen.

In his second appearance, it is discovered that he knows explosives, bites his nails, drinks Bordeaux wine and eats communion wafers.

In his third appearance, it is revealed that he works out and drinks cold brew coffee.

In his fourth appearance, his eyelines are seen bolder and it is noted that he is right-handed.

Paul became a suspect after Jones and the player learned (per Fabian Roland-Tavin) that he was the victim's priest. After being told about her murder, he revealed that the victim was a devout churchgoer who often helped out at the church. After his interrogation, the team decided to search the church.

Paul was spoken to again about his biblical metaphor of the victim as he had glued a picture of Debby's face onto a painting of Eve, the first woman. He explained that he had taken a vow of chastity, but found that he had feelings for the victim. No matter what he did, he could not concentrate around her as he was mesmerized by her womanhood.

Paul was found to be innocent after the team incarcerated Tallulah Shropshire for Debby's murder. But he was later visited by Gloria and the player, who questioned him about agriculture businesses AgriMeadows and GrimFoods. He revealed that Fabian, the CEO of GrimFoods, had contacted him as Fabian had left his briefcase at the church. This prompted Gloria and the player to search for his briefcase under the guise that they would return it to Fabian.

Paul became a suspect again after Gloria and the player found the book of bereavement that he gave to Mia to cope with the loss of her father. Paul said that Mia had enrolled in his Sunday school as a child and that he had been helping her with her religious life since then. After being told of her murder, Paul said that the Lord had taken her for unknown reasons and that he did not know of anyone who would take Mia's life as she was a God-fearing woman.

Later, the team found traces of communion wafers on Mia's broken childhood keepsake, prompting another interrogation. Paul said that Mia had been growing angry with the Lord since her father's death. When she went to confession that morning, Paul tried to reassure her that the Lord worked in mysterious ways, even recounting his experience in the military. He then gave her the keepsake to remind her of her devoutness, only for her to throw it onto the floor. Worried for her, he persuaded her to hold onto the keepsake in the hope that she would change her mind.

Paul was found innocent after the team incarcerated Brock Perry for Mia's murder. After the trial, Paul volunteered to hold the eulogy for Mia's funeral and so asked the team for help finding the eulogy as he had dropped it in the crime scene. Jones and the player found the eulogy and returned it to him. During the funeral, Paul celebrated Mia's diligent and kind-hearted nature, and remarked that Mia was taken by evil as she was in the wrong place in the wrong time. Paul then asked the funeral attendees to fight the evil all around them and inside of them.

Paul became a suspect for the third time after Gloria and the player found his rosary beads in the secret lab. He told the team that he gave the rosary beads to all members of his congregation, and that the victim had been a devout disciple. Gloria then told him about the murder and asked him if the victim had ever indicated that he was in trouble. He told the team that Henry had expressed concern over the fate of his soul. He then excused himself to go pray for Henry's safe passage to Heaven.

Paul was spoken to again about the warning he gave to the victim. He explained that he felt as if the victim had strayed from the path of righteousness, questioning scripture and his ability to preach. Paul then gave him the angel warning to remind Henry to follow the Word of the Lord.

Paul was found to be innocent for the third time after the team incarcerated April Liu for Henry's murder.

Paul became a suspect once again after Jones and the player found his Bible under the dome. He told the team that he had rushed to the dome after being informed of unholy things occurring there. He said that Denise had crossed the line by creating the neohumans, accusing her of trying to play God. Saying that she deserved to be punished, he was not surprised when he learned that she had been killed, saying that it was to be expected of someone meddling in the devil's work.

Paul was spoken to again about his bloody handprint at City Hall, where Denise's decapitated head had been displayed. He explained that on his way to the church from the dome, he came across the square and found Denise's head on the statue. Feeling sorry for her, he touched her head to bless her, accidentally staining his hand with her blood.

Paul was found to be innocent once again after the team incarcerated Otto Kessel for Denise's murder and for assuming the role as leader of the neohumans. 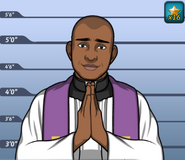 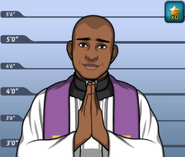 Paul, as he appeared in Blaze of Glory (Case #60 of The Conspiracy). 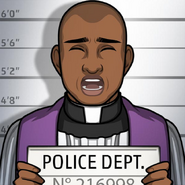 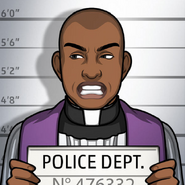 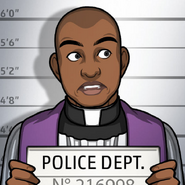 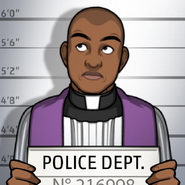 Retrieved from "https://criminalcasegame.fandom.com/wiki/Paul_Sheppard?oldid=472353"
Community content is available under CC-BY-SA unless otherwise noted.