Paul Oaster was the killer of plastic surgeon Alan Cardwell in Under the Knife (Case #10 of Grimsborough).

Paul is a 45-year-old writer with gray hair and brown eyes. He normally wears a dark blue shirt and a golden chain. It is known that Paul drinks coffee, plays golf and is right-handed.

Paul appeared in Under the Knife, where he killed a plastic surgeon named Alan Cardwell. He loved a woman named Samantha Warner and wanted to protect her. When he found out that Alan had an affair with Samantha, he could not bear it. As a result, Paul stabbed Alan with a candlestick and left the victim to die in an alley.

Paul was sentenced to life in jail for the sick crime. 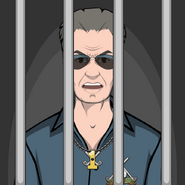 Paul, sentenced to life in jail for the murder of Alan Cardwell. 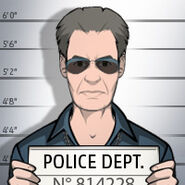 Retrieved from "https://criminalcasegame.fandom.com/wiki/Paul_Oaster?oldid=488137"
Community content is available under CC-BY-SA unless otherwise noted.