Paul Irwin was a suspect in the murder investigation of SOMBRA recruit Riaja Somalinggi in The Sweet Escape (Case #33 of World Edition).

Paul is a 43-year-old crocodile enthusiast. He has chin-length blonde hair and stubble, and has a scar on his neck. He dons a dim, light green shirt under a brown leather vest, and a crocodile tooth necklace. It is known that Paul takes jamu.

Paul became a suspect after Jack and the player found a video of him at the crime scene. He was glad to have his camera back, and said he was busy filming a documentary about crocodiles. When Jack informed him of the murder, Paul told them that he did not see anything as his focus was on the crocodiles, so he could not help them.

Paul was interrogated again about his blood being found on the victim's cap. He said that he was busy filming by minding his own business when the victim suddenly appeared. She went crazy telling him to stop filming and accusing him of being some sort of agent. Paul did not know what she was talking about and told her to lower her voice, then suddenly the victim struck him and he had been recovering since.

Paul was found to be innocent after Maya Salim was incarcerated for Riaja's murder. 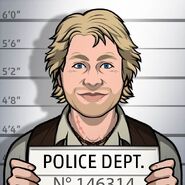 Retrieved from "https://criminalcasegame.fandom.com/wiki/Paul_Irwin?oldid=415700"
Community content is available under CC-BY-SA unless otherwise noted.