Patrick is a 55-year-old wealthy collector who has short gray hair and mustache. He wears a purple ascot underneath a red and black suit with an owl turquoise brooch. It is known that Patrick is in contact with beeswax and has an art degree.

When Jones and the player were searching the murder scene (Workshop), they found a torn card. They pieced it back together and learned that it was a business card which had the address of the Victorian Garden in 15 Lincoln Street. After reading this, the team searched the Victorian Garden where they found an accounting book inside a pile of dirt. The accounting book contained many orders to the victim, Wilhelm Moss. Just when the team was having a look at it, the owner of the house, Patrick came and the team interrogated him. When they accused him of burying his own accounting book, Patrick denied and said that that he had no idea who had thought it funny to bury his book in the garden. He admitted that he had nothing to hide and that he had ordered paintings to Wilhelm, which was perfectly legal. When asked if he had ordered the painting of The Mad Pilgrim, Patrick replied that he had. He said that it took him years to find someone who would have enough talent to attempt this feat, and Wilhelm was a master at copying paintings.

Patrick was again called in after the team discovered his fingerprints on a beeswax found near the porch of his house. When asked if he often used beeswax, Patrick replied that he used it a lot because of the fact that it kept his moustache so lustrous. He also said that the smell of beeswax was very soothing and that he always told Wilhelm that some beeswax would do his nerves good after the victim had started complaining and claiming to be receiving death threats, sent by the mysterious painting of The Mad Pilgrim.

Patrick was found guilty of grand homicide when evidence incriminated him as Wilhelm's killer. He had poisoned Wilhelm with a neurotoxin when the victim was about to finish the painting of The Mad Pilgrim. After being arrested, Patrick explained that he was getting poor day by day. Since Wilhem had no marks on his body and his death seemed to be of no cause, everyone believed that The Mad Pilgrim's ghost had killed him, thus making valuable framework. The valuable painting belonged to Patrick and he wanted to sell it for money and make profit.

For the murder of Wilhelm, Patrick was sentenced to life in jail. 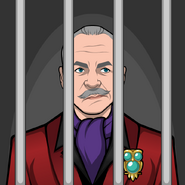 Patrick, sentenced to life in jail for the murder of Wilhelm Moss. 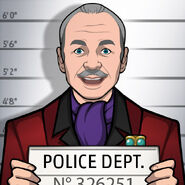 Retrieved from "https://criminalcasegame.fandom.com/wiki/Patrick_Rufio?oldid=449344"
Community content is available under CC-BY-SA unless otherwise noted.