Patricia is a crime novelist. She has blue eyes, wrinkles, and sports red lipstick.

In her first appearance, then 65 years old, she has short blonde hair. She sports a red blouse, a blue polka-dot scarf, and a pearl necklace buried in the scarf. She sustains a bee sting on her neck and sports red lipstick. It is known that Patricia drinks mead and sails boat.

From her second appearance onwards, now 70 years old, her hair color changes from blonde to grey. She is seen wearing a blue blouse with a floral pattern under a yellow knitted cardigan, which houses a blue handkerchief in her right breast pocket. Additionally, she dons glasses on a chain and a black bead necklace. Furthermore, she holds a notepad in her left hand and a pen with a blue feather in her right. It is discovered that she collects antique guns, eats lobster bisque and has traveled to the Caribbean.

Patricia became a suspect after the team found her book manuscript, Troubled Waters, and thus she was called into the investigation at her book collection to discuss about Andrew's death. The team told Patricia that a character named "Andrew Sootworth" was conceived at Archibald's blessing. Andrew refused to talk with Patricia about the book, as Patricia believed that novels takes inspiration from real life. Patricia then told the team she took some boat sailing lessons as "Andrew Sootworth" drove a boat in the novel, but also mentioned that the hero died during a fishing trip.

Patricia was called in a second time after the team examined a testimony and the examination pointed out directly to her. Patricia admitted to the team that she saw Andrew while she was having mead at the Marina. Patricia told the team that Andrew was always with someone but she could not spot the exact person as her wanton mead drinking prevented her from knowing who the companion was. This prompted the team to suspect Patricia a bit more and to revisit the Maple Heights Marina for missing clues.

After Isabella was indicted, Jezabela approached the police about a paddle with her company's logo left in the Maple Heights Marina. The team did not hesitate to talk to Patricia about the paddle, so the team then checked out the Marina and found Jezabela's white paddle, used forensic powder to find fingerprints, and then sent the paddle to Alex for a verification. The fingerprints belonged to Patricia, made her confess the reason for property violation, and issued her with a fine.

Patricia became a suspect again after Jones and the player found her book, Thirty Tones Lighter, inside the victim's briefcase as well as the book dedication which she wrote to the victim, saying that she knew Joshua would enjoy the book as much as the last one. The team then came to ask Patricia about her relationship with Joshua. After reuniting with the player, she revealed that Joshua was one of her long-time readers and a real gentleman. When the team informed her of his murder, Patricia was shocked. She then revealed that she often saw Joshua at her book signings, but she could not tell the team much about the victim because she signed so many books due to the fact that Thirty Tones Lighter was a hit.

Patricia was spoken to again after the team (per Cathy) found out that there was a collection of bad photo montages of Patricia that the victim glued onto other people with few clothes in his tablet. After the team asked Patricia about the victim's fantasies, Patricia said that Joshua did seem like a gentleman at first. But then, Joshua became obsessive, he sent Patricia bad pictures and even said that he wanted Patricia and him to do the same things as Patricia had written in her books. After that, Patricia revealed that she always carried one of her antique guns from her collection because her books sometimes attracted a certain type of readership. When Jones asked Patricia if she filed a complaint against the victim, she answered that she took a Caribbean cruise to get away for a while instead.

Patricia was found to be innocent again after the team incarcerated Carl Rossa for Joshua's murder.

Patricia became a suspect for the third time after Jones and the player found a political recruitment board which showed her and Mayor Price and discovered that she was involved in the Mayor's party. The team then asked Patricia, who revealed that she was one of Mayor Price's biggest supporters. Patricia then said that Mayor Price's death was a huge loss for the city, and she would not spend her time canvassing new members and organizing rallies anymore as the Mayor was gone. After that, Patricia told the team that people had to thanked the Mayor for what she had done when she was alive, and it was Patricia's duty to ensure that Mayor Price's contribution to Grimsborough was remembered.

Patricia was spoken to again after the team (per Rupert) found out that she was the person who made a piñata of Mayor Price's face and beat it. After being questioned about the reason why, Patricia explained that she was furious with the Mayor as she had banned Patricia's books from local bookstores, on the pretext that they perverted the minds of youngsters, despite the fact that Patricia had spent years supporting Mayor Price's career. In the end of the conversation, Patricia said that the victim was lucky making that piñata was all Patricia did to her.

Patricia was found to be innocent for the third time after the team incarcerated Ernest Emerson for Mayor Price's murder and for indirectly killing multiple people through the Demon Fish. However, the team (per Amir) discovered that she was the stealer of the mayoral seal. Patricia then explained that she noticed the mayoral seal on the Animal Control's floor when she was visiting there to get an inspiration for a story she was working on. And she thought she could reverse Mayor Price's decision to ban her books. Jones and the player then fined Patricia for theft and got the mayoral seal back to Mayor Warren. 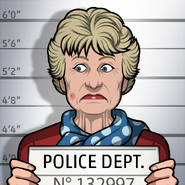 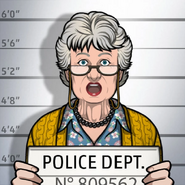 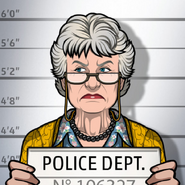 Retrieved from "https://criminalcasegame.fandom.com/wiki/Patricia_P._Harris?oldid=524855"
Community content is available under CC-BY-SA unless otherwise noted.