Season 8 of Criminal Case
The Parisian Police Squad (PPS) acts as the primary law enforcement agency in the city of Paris, making its appearance in the eighth season of Criminal Case.

The Parisian Police Squad investigates murders in the city of Paris, searching crime scenes for clues, interviewing witnesses and suspects, and carefully analyzing evidence in order to progress. After gaining all the criteria, the force is able to apprehend the actual killer behind the murder and put them behind bars.

Nine people, including the player character, have acted as key members of the Parisian Police Squad over the course of the game, with each of them assigned a particular job:

Loans from America: the player and Carrie

Chief Delacroix welcomed the newly arrived Carrie (loaned from Los Angeles) and the player before having them meet up with Hugo to solve a high-profile murder. During this investigation, the player met all the members of the police. Upon closing the case, Carrie revealed that she had actually gone to Paris to find her long-lost brother, Cody, who had sent her a postcard from there. After solving a string of murders in Fantasy, the siblings finally reunited, with Cody and his girlfriend, Eleonora Macaron needing their help to get them out of the latter's father, Antoine's gang. 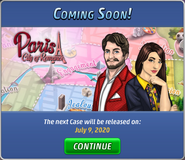 Hugo and Carrie in a "Coming Soon" in-game popup for the next case of City of Romance. 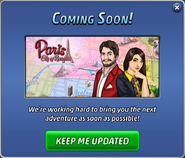 Hugo and Carrie in a "Coming Soon" in-game popup as more cases for City of Romance are added.

Hugo and Carrie pop up as the player receives his/her final score of a crime scene. 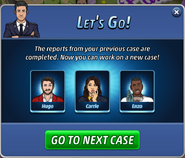 Hugo, Carrie, and Enzo after filling reports for the player.