Papa Quansah was a suspect in the murder investigations of gun dealer Merv Waylon in Blood Diamond (Case #54 of Pacific Bay) and ex-con Louis De Rico in No Honor Among Thieves (Case #55 of Pacific Bay).

Quansah is a 28-year-old warlord from the Mayakan tribe in Africa. He dons a camo vest and beret and wears an eye patch over his right eye. He wears an ammunition belt over his right shoulder and a bone necklace around his neck. He has a red cloth tied to his right arm and several writings on his left arm. Quansah is seen carrying an assault rifle on his back.

In his first appearance, he dons a Gun Con badge on the left side of his chest. It is known that Quansah throws knives, plays blackjack and listens to country music.

In his second appearance, he ditches his Gun Con badge and has an orange dye stain on his vest.

Quansah was first spoken to after Amy and the player analyzed a statue he sent to the victim. According to Russell, the statue was meant to signify a business agreement, meaning that Merv and Quansah were in business together. He was surprised to hear that Merv lost the statue, saying that it's a bad omen. The deal was that Merv would give Quansah guns, then Quansah would give diamonds to him in return. He was surprised to hear of Merv's death, but said that he needed to find a new dealer soon.

The team spoke with Quansah again regarding a finger that was cut from the victim's hand. Analysis from Roxie not only revealed that the finger was the victim's, but she found traces of pure African diamond powder on it, leading the team to suspect the warlord. When asked about the finger, Quansah replied saying that Merv honored the business agreement by cutting it off himself. He went on to say the victim attempted to cheat him by giving him water pistols and not real guns. He went to Merv and told him to repay him by cutting off his own finger, and Merv did just that. Amy was not sure to believe him or not, so for the time being Quansah was put into custody.

Quansah was found to be innocent of Merv's murder after the team arrested Sheikh Faisal, but he had yet to be found innocent of cutting off Merv's finger. Looking around the place where Merv was tortured, they managed to find a diamond knife, so they found some fingerprints and sent it off to Hannah for analysis, only for Hannah to reveal the fingerprints actually did belong to Merv Waylon, and the way the fingerprints were on the handle revealed that he did cut off his own finger. Amy warned Papa Quansah that while he was innocent of this instance, the team will return if they find any proof of him smuggling. He made it clear to Amy and the player that they will not hear from him again.

Quansah was interrogated once again after he was found trying to make a hasty getaway. Amy managed to hold him off long enough for the player and Frank to arrive and arrest him. Ever since Merv Waylon cheated him out of diamonds, Quansah needed cash, so he took part in Louis's heist as the muscle of the operation. He was aware of Louis's apparent death, which was the reason why he grabbed what he could and hightailed it out while the getting was good.

Frank and the player had to speak with the warlord again after they found that he wanted to dispose of the heist team so he could have a lot more money. Quansah did confirm that he had plans for the money, and he would do anything so he could get it. He was fine with someone else killing Louis, as he felt it was one less step to him getting what he wanted.

Quansah was found to be innocent after Louis's killer was revealed to be Danny Moto, but he was briefly spoken to again regarding a possible sixth person being involved with the heist. He was shocked to hear that there was a sixth person involved, as he knew there were only four other members besides himself. But he had the nagging feeling that Louis was hiding stuff from the rest of the team, and suggested that the player and Chief Marquez look at the airport, as he had grabbed some of Louis's stuff when he died. 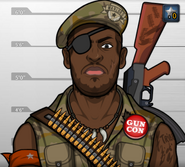 Papa, as he appeared in Blood Diamond (Case #54 of Pacific Bay). 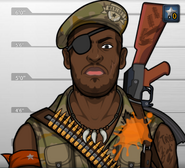 Papa, as he appeared in No Honor Among Thieves (Case #55 of Pacific Bay). 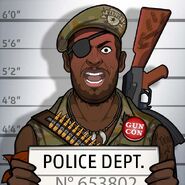 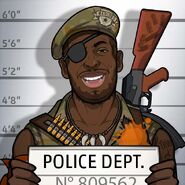 Retrieved from "https://criminalcasegame.fandom.com/wiki/Papa_Quansah?oldid=502531"
Community content is available under CC-BY-SA unless otherwise noted.