Pablo del Prado, appearing as an unseen minor character in Criminal Case, was mentioned during the events of Stonewalled (Case #8 of The Conspiracy).

Pablo is a Luzaguayan drug lord under the alias Pablo el Loco, described to have a narcotics empire spanning the whole globe. He is also the father of socialite Guadalupe del Prado.

Four years prior to the events of the case, lawyer Stella Ziarati was building a case against Pablo to bring down his narcotics empire. Finding out about this and wanting to protect her family, Guadalupe bashed Stella's head in with her law award and built a wall around her body so as to hide the murder.

Shortly before the events of the case, a major earthquake struck Grimsborough, breaking the wall of the penthouse that hid Stella's body. Upon Christian Bateman's report of the body, an investigation started, eventually culminating in Guadalupe's arrest. Because of her vague statement, the police searched for her motive and eventually found out about Pablo's drug empire. They then gave the research done by Stella to her colleague, Trudy Lively, so she could finish building up the case against Pablo. 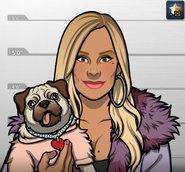 Retrieved from "https://criminalcasegame.fandom.com/wiki/Pablo_del_Prado?oldid=408742"
Community content is available under CC-BY-SA unless otherwise noted.