Uncharted island in the Indian Ocean

Out of the Blue is a case featured in Criminal Case as the one-hundred and fifty-first case of the game. It is the thirty-sixth case of the game's World Edition (Season 3) and the final one to take place in Oceania.

The Bureau arrived at SOMBRA's mysterious island to try to end the "next level" program. After disembarking, Jack and the player found the body of Professor Marshall Metcalf stabbed in his nape with a syringe filled with poison.

Elliot said that X stopped responding after disembarking. Later, Elliot received an emergency call from volcanologist Ruby Armstrong, who was being held hostage inside the island's volcano. Furthermore, an eruption threat ensued, prompting the team to hurry the investigation. Eventually, treasure hunter Brice LeBeau was incriminated as Metcalf's killer.

After denying involvement, Brice admitted he killed Metcalf. Brice was scuba diving on the island when an insane Marshall approached him at the beach and tried to inject him with his syringe. Brice panicked and injected Marshall with it in self-defense. Judge Adaku authorized Brice's extradition to France to be tried and sentenced.

After the arrest, Ruby told the team that they had two hours to investigate the island before the volcano erupted and the island sank. Asal Hawaa pointed the team to the SOMBRA's hideout for the information Metcalf leaked her before breaking up with Jack. They found Metcalf's files, which (per Lars' analysis) mentioned a ship carrying assassins away from the island two days before. Unfortunately, Lars could not determine where due to the incomprehensible writing.

Meanwhile, Michelle Zuria admitted she was X to Jack and the player, and pointed the team to the volcano lab for proof. They found a pen drive, which (per Elliot's analysis) confirmed her claims, so the team interrogated her again. Michelle said she helped the Bureau because the "next level" program was against her morals. She also admitted to sabotaging the bomb she was paid to plant in the shipwreck in Sydney so that the team could find Rufus Murlock's documents.

Michelle then said that SOMBRA's assassins boarded the ship on the beach, so the team headed there. Inside Baxter Fraser's bag, they found a map which proved that the assassins were sent to Kenya. Baxter said that his mission was probably assigned to another agent.

The volcano finally erupted and the island sank behind the Bureau's boat. Taking Michelle with them, the Bureau took a plane to Kenya to follow SOMBRA's recruits. 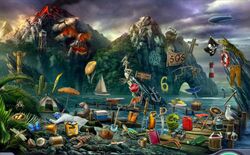 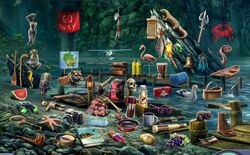 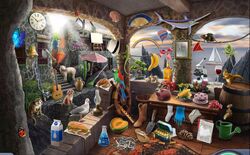 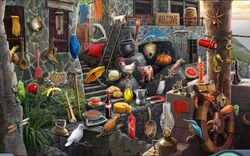 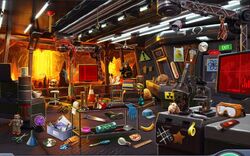 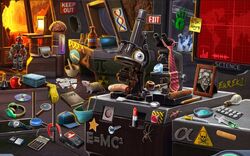 Control Desk
Add a photo to this gallery

Retrieved from "https://criminalcasegame.fandom.com/wiki/Out_of_the_Blue?oldid=499497"
Community content is available under CC-BY-SA unless otherwise noted.