Maddie O'Malley (All Chapters)
Charles Dupont (The Gears of Change 3)
Out of Steam is a case featured in Criminal Case as the fifteenth case of Mysteries of the Past (Season 4) and the one-hundred eighty-sixth case overall. It takes place in the Century Mile district of Concordia.

Maddie and the player watched Orville West's test flight with the Steampack. As Orville was flying, he was gunned down and crashed into a hot-air balloon. Orville died while the balloon's pilot, Walter Cumberbatch, sustained injuries.

During the investigation, Commissioner Baldwin was flagged as a suspect. Lady Hyacinth Pendergast later fainted and knocked over several inventions. Later, an angry mob threatened to destroy the inventions at the transportation pavilion, but were stopped in time. The team found enough evidence to arrest Abe Mullins for the murder.

Abe denied involvement but then admitted to the crime. He believed that the world was going to end if the Steampack succeeded and people gained the ability to fly. Wanting to save humanity, he shot Orville with a steam-powered shotgun. Judge Takakura sentenced him to 15 years in a psychiatric penitentiary.

After the trial, Maddie reported that Walter recovered from his injuries. In the hospital, Walter told Charlie and the player that the Steampack seemed to be malfunctioning before Orville was shot. As Charlie wanted to investigate the breakdown, they looked for the Steampack design in Orville's workshop. With the design, Charlie rebuilt the Steampack and unsuccessfully tested it. Greta Gundwood said it was because of a missing piece, which they found at the flight field. She then said that the Steampack was still dangerous because the piece was broken. The team suspected sabotage, although Greta said it was Orville's incompetence.

After Maddie and the player dug into Justin Lawson's sad past, Chief Wright reported that a giant monkey escaped and was on the loose in the city.

Abe Mullins
Add a photo to this gallery

Justin Lawson
Add a photo to this gallery 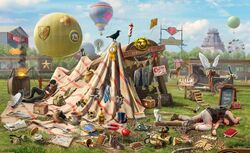 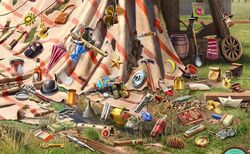 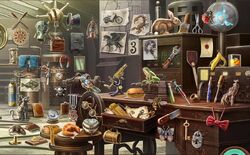 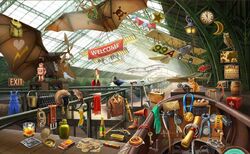 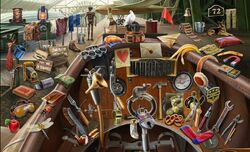 Cockpit
Add a photo to this gallery

Retrieved from "https://criminalcasegame.fandom.com/wiki/Out_of_Steam?oldid=409139"
Community content is available under CC-BY-SA unless otherwise noted.