Otto Schmetterling was a suspect in the murder investigations of archaeologist Burt Montana in Temple of Doom (Case #40 of Pacific Bay) and "weird guy" Randolph in No Place Like Home (Case #45 of Pacific Bay).

Otto is a 61-year-old art collector of German ancestry with gray hair concealed under his black fedora hat, a green right eye and a broken left eye suggested by his facial features. He dons a black jacket with a black pinstripe collared shirt under it. Below that is a white undershirt and a yellow-and-red striped tie. Otto holds a wooden staff with a golden orb with his right hand. He also has a noticeable butterfly brooch with a skull embedded on it.

In his first appearance, it is known that Otto eats red chili peppers.

In his second appearance, it is discovered that he eats candy and has read Truth About Aliens.

Otto was called into the investigation after Amy and the player found a vat of gold bars in Burt's office. Hannah felt the gold bars were bribes (as she knew cops were not allowed to take bribes, much to the fact she was tempted) but Amy countered that the gold bars are considered evidence. The good part was that Hannah confirmed Otto to be the one issuing those gold bars to the victim.

Amy started the conversation by asking Otto what a box of gold bars was doing in Burt's office to which Otto said it was a down payment for the Aztec statue. Amy felt this was a shady practice but Otto countered that this was an opportunity to cash in a fortune for a couple of lost Aztec treasures, also going so far by using the Aztec statue to make himself a god.

Otto would be due for a second conversation after Amy and the player found a framed document revealed by the player to be butterfly drawings by Otto since he wore a butterfly matching the description of those drawings. Amy asked Otto about the threat in which Otto made the threat to demand Burt to turn in the Aztec statue at the cost of his life, believing that humans have a price in their head.

Otto was innocent of murder, but was guilty of theft, smuggling, and money laundering after he was found by Amy and the player stealing artifacts belonging to Pearl Montana.

Otto was brought into another investigation when Amy and the player found a card belonging to him on the crime scene. He left it there because he heard of an alien living in Rhine Canyon, who he believed was the victim. He handed out business cards in hopes of finding him, but was disappointed to hear that Randolph had been murdered. Then, he mentioned he could always find another in the military base Area 61, which prompted the player and Amy to investigate.

After examining the crime scene again, the team managed to find a glass jar that was reserved for an alien head. Further examination revealed Otto's butterfly symbol on it, which prompted the team to interrogate the art collector once again. He confessed to wanting to add Randolph to his collection after reading the book, Truth About Aliens. When asked if he decided to cut him open, Otto replied that there was no need for that as a piece of the victim would have made him famous amongst collectors. Once again, he showed his disappointment at finding out the victim was not an alien.

Otto was found innocent for murder once again after Dr. Jarvis Donne was found guilty for autopsying Randolph. 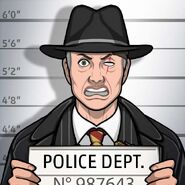 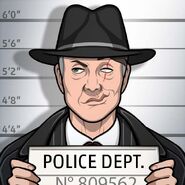 Retrieved from "https://criminalcasegame.fandom.com/wiki/Otto_Schmetterling?oldid=437493"
Community content is available under CC-BY-SA unless otherwise noted.