Oswin Piper was a suspect in the murder investigations of AgriMeadows employee Christy Cole in A Pointy End (Case #45 of The Conspiracy) and security guard Jon Benson in Eve of Disaster (Case #59 of The Conspiracy).

Oswin is a 43-year-old climate change activist with short black hair, a mustache and a beard. He wears a blue T-shirt with an Earth image printed on it underneath a brown jacket with two front pockets. He is also seen holding a megaphone.

In his first appearance, it is known that Oswin wears work boots and drinks Mazundan coffee.

In his second appearance, it is discovered that he has a cat, wears vegan shoes and eats donuts.

Oswin became a suspect after Gloria and the player found his climate change flyer at the scene of the murder. After ranting about his cause, he was asked about Christy, who he said was always nice to him when he went to hassle the higher-ups. He was then told that Christy had been killed and said that everything would die in the end.

Oswin was spoken to again about a kerosene tank he had left at the AgriMeadows headquarters. He explained that he wanted to burn the building to the ground as the business needed to pay for the damage it was doing to the environment. He explained that the victim agreed to help him out, but had backed out after her fiancé died, letting him down. Oswin was then arrested for attempted arson.

Oswin was found to be innocent after the team incarcerated Abel Dreschner for Christy's murder. Later, he requested to see Jones and the player so that he could tell them his plan to resolve the corn crisis. He explained that he had developed a drone that was capable of spreading a blend of nutrients on the soil to promote plant growth. He then suggested that they searched for his prototype at Corn Fest and gave them the money to pay for the drone's repairs.

Oswin became a suspect once again, this time in the theft of the meteorite core (i.e. the catalyst for a nuclear mega-earthquake) and the subsequent murder of Jon, after the team found his anti-nuclear energy sign at the locked-down nuclear reactor site. The team put him under arrest for breaking in, but he noted that he had spotted nothing unusual.

Later, the team found Oswin's research on how the plant could possibly cause a nuclear earthquake. Oswin said he had planned to show his research to the nuclear plant supervisors as a warning as he had theorized that introducing the meteorite core into the nuclear process could cause a mega-earthquake. He then claimed not to have discussed his theories with Denise Daniels or S.A.R.A.

Oswin was once again found to be innocent when S.A.R.A. lawyer Martin Davenport was discovered to be the killer and Denise's accomplice. 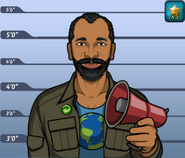 Oswin, as he appeared in A Pointy End (Case #45 of The Conspiracy). 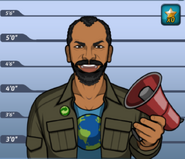 Oswin, as he appeared in Eve of Disaster (Case #59 of The Conspiracy). 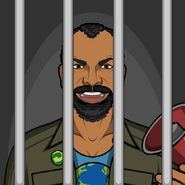 Oswin, in custody for planning to burn AgriMeadows down. 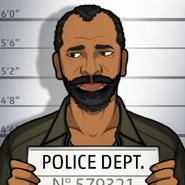 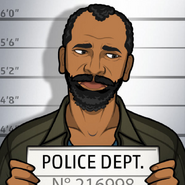 Retrieved from "https://criminalcasegame.fandom.com/wiki/Oswin_Piper?oldid=472156"
Community content is available under CC-BY-SA unless otherwise noted.