Oscar Thompson was a suspect in the murder investigation of his boyfriend, power plant manager Ryan Min, in Lights Out (Case #50 of The Conspiracy).

Oscar is the 38-year-old boyfriend of the victim. He has short, tousled black hair. He wears a turquoise buttoned-up T-shirt with a toucan and palm leaf pattern. It is known that Oscar eats energy bars.

Oscar became a suspect after Gloria and the player learned that he was the victim's boyfriend. Already panicked that he could not contact Ryan after the blackout, Oscar broke down in tears after the team told him about the murder.

Oscar was spoken to again about his falling out with the victim. He revealed that despite having been together for five years, Ryan was still talking to guys on dating apps. After he confronted him about it, Ryan suggested that they went on a romantic picnic. However, he broke Oscar's heart when he did not show up.

Oscar was found to be innocent after the team incarcerated Felix Murray for Ryan's murder. 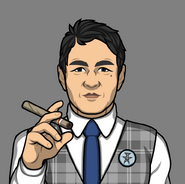 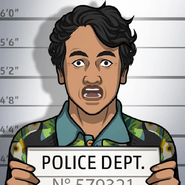 Retrieved from "https://criminalcasegame.fandom.com/wiki/Oscar_Thompson?oldid=540168"
Community content is available under CC-BY-SA unless otherwise noted.