Orsino Ziegfeld was a suspect in the murder investigation of acrobat Annie Capri in Death at the Circus (Case #52 of Pacific Bay).

Orsino Ziegfeld is the 55-year-old ringmaster of Paradise Circus. He has gray hair and wears a red suit with yellow linings and black collar over a yellow vest and white shirt with a red bow tie and a top hat with red stripe. He is seen holding a black and golden stick. It is known that Orsino eats shaved ice.

Orsino was first interrogated after his megaphone was found at the crime scene. He was shocked to hear about the victim's death, saying that she was one of the most amazing acrobats he had ever seen. Amy proceeded to ask the ringmaster about her last location, he replied saying that Annie went to a rooftop party with the other circus artists.

Orsino was spoken to again after the team found his spare hat at the wax museum, where the victim called the police for help. When asked if he followed the victim to the wax museum, he said yes and that bringing his employees back was his right. The reason for it was because the victim thought he worked her too hard. Orsino went on to say that the circus is only meant to be fun for the audience, not so much for the artists. He said he had to set an example or else the other artists may threaten to leave the circus. When Amy suggested he may have killed her to set an example, Orsino said he needed the victim, plus he never found her at the museum.

While the ringmaster was found to be innocent after the team arrested Mikey Bolero, he found himself in trouble later on. Judge Dante and the player spoke to him with proof of him abusing the Hanoi Sisters. Orsino said he needed to be strict so he could keep the members of the circus in order. Judge Dante informed the ringmaster he needed to change his tactics or else he would go to jail. Not wanting to go jail, he agreed that he would pay his employees better and handed over the lock to the cage. Orsino was let off with a fine, but Judge Dante warned him that if he hears of this abuse again, he would make sure to lock up the ringmaster for good. 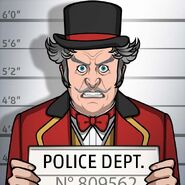 Retrieved from "https://criminalcasegame.fandom.com/wiki/Orsino_Ziegfeld?oldid=413640"
Community content is available under CC-BY-SA unless otherwise noted.