Orlando is a 44-year-old boxing coach. He has crew-cut black hair and a 5 o'clock shadow, a snake tattoo on his right arm and a scar across his left cheek. He dons a white shirt with the Muay Thai logo on it. It is known that Orlando is physically fit, takes vitamins and eats lemongrass.

Orlando became a suspect after the player and Jack found a cardboard ad for his training, at the crime scene. When informed of Thanid's murder, he was shocked saying that he was in the best shape of his life. When asked if he knew anyone that might want to take their rivalry with Thanid outside the ring, Orlando said that none of Thanid's rivals would go so far as to murder him. He was sad since the victim had been training with him since he was a child, and did not imagine this night to be his last.

Orlando had to be interrogated again about a message telling the victim to take his training seriously. Jack was confused since Orlando previously said the victim was in top condition. Orlando did not deny that and still felt he was, but said the victim lacked discipline. Thanid never focused too much on training and spent his time drinking, smoking, and sleeping around, which made Orlando think that Thanid did not deserve the title.

Orlando was later found to be innocent after the team incarcerated Chon Sansurin for Thanid's murder. However, he was spoken to again by Jonah and the player about Marina and her apparent interest in Thai boxing. He said that Marina had just visited and asked some questions regarding their training, and had gone back to headquarters. Jonah had requested Orlando for tickets for the upcoming fight, to which he replied saying he would, especially since The Bureau was able to catch Thanid's killer. 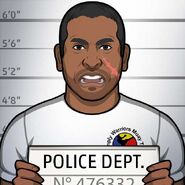 Retrieved from "https://criminalcasegame.fandom.com/wiki/Orlando_Weathers?oldid=443747"
Community content is available under CC-BY-SA unless otherwise noted.