One Bigfoot in the Grave is a case featured in Criminal Case as the second case of Supernatural Investigations (Season 7) and the three-hundred twenty-fourth case overall. It takes place in the West.

After Hope successfully tracked down Mina Reynolds, a girl who was attacked and kidnapped by a vampire, to Oregon. Luke and the player headed to the woods to investigate. There, however, the team found a bigfoot beaten to death.

Mid-investigation, Gwen told the team that she had overheard someone in the cave bar bragging about seeing a bigfoot in the woods. Later, while the team was convening in the museum, an animal skull fell on Luke's head, which took ten minutes for museum curator Darius Wexler to remove. The team then found enough evidence to arrest logger Elwood Grimes for the murder.

Elwood admitted that Darius had offered to pay to replace his tools that Bigfoot had destroyed if he could catch Bigfoot alive. When Elwood went to the woods to set up the trap, Bigfoot started attacking him. Elwood then grabbed a rock and bashed him to death. Chief Arrow then advised Elwood to get out of town before the rest of the bigfeet started coming for him in revenge.

Post-trial, Luke and the player confronted Darius regarding his actions. With no legal authority over Darius due to the supernatural nature of his crime, the team set out to find evidence of his illegal dealings. The team soon found that Darius had stolen an amulet used to summon almas (Caucasus versions of bigfeet) from the Institute of the Pre-Byzantium in Turkey. The team then handed him over to the institute authorities.

Meanwhile, Gwen and the player found a piece of Mina's dress in the woods which was (per Priya) stained with tea. They then asked Bathsheba, a tea party-obsessed vampire, for any leads, to which she replied that fellow vampire Fabien de la Mort had given it to her. Fabien then told the team he had found the fabric near a cave in the woods before telling Gwen that her boyfriend, Pierce Cromwell, was a vampire. With Gwen distressed over the revelation, Ben and the player went to the cave bar to get cave-hunting equipment, which Hope used to find the likeliest cave Mina was in. The team then found Mina, who told them that she remembered a vampire kidnapper muttering something about her "virgin blood" and "Black Ridge." The team then took Mina back.

After all the events, the team determined that Black Ridge was a ghost town in Nevada. Speculating that the vampire was preparing for a ritual, the team headed to Black Ridge to stop Mina's kidnapper.

Mina Reynolds
Add a photo to this gallery 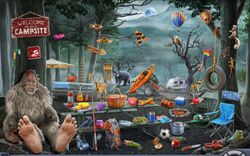 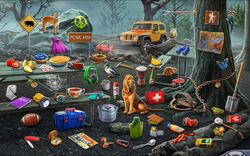 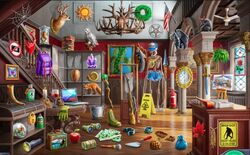 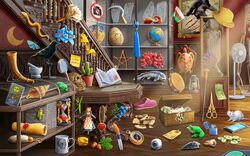 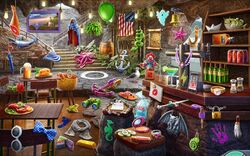 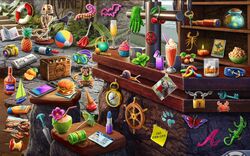 Retrieved from "https://criminalcasegame.fandom.com/wiki/One_Bigfoot_in_the_Grave?oldid=517827"
Community content is available under CC-BY-SA unless otherwise noted.