Case #7: Murder by Proxy (s3)
Prof. Omar Bahir (1962–2015; Arab: عمر باهر), also known as The Sword (Arab: السيف), was a suspect in the murder investigations of military attaché Adam Hassan in Murder by Proxy (Case #7 of World Edition) and protest leader Hamza Boussefi in Killing Spring (Case #9 of World Edition). He was later revealed to be the killer of nomadic tribe leader Anir Aznag in Die by the Sword (Case #12 of World Edition), where he was shot to death during his arrest.

Omar was a 53-year-old professor with green eyes, short brown hair, a mustache and beard. He wore a tan shirt with a swirly and leaf motif under a gray suit jacket and a blue scarf around his neck with a snake badge and another badge with two human faces on his right lapel. He also wore black-rimmed glasses and a hand necklace.

In his first appearance, it is known that Omar ate saffron, knew ancient Arabic and drank mint tea.

In his second appearance, it is discovered that he ate couscous, went fishing and used Buzzer.

In his third appearance, he replaced his blue scarf with a red one and had a scar on the left side of his forehead. It is revealed that he knew chemistry and spoke Arabic.

Omar was first interrogated after Jack and the player found his briefcase. Analysis from Elliot revealed that Omar had connections with some rebel tribe leaders, including the ones who met Adam at Omar's riad. When asked about the leaders who met Adam, Omar simply said that they were elder tribal leaders, but did not care if they were a part of any rebellion. The victim had contacted him through the embassy, and requested info regarding ancient tribal influence on modern rebel intelligence. Though the two would normally meet at the souk, Omar felt it was best they meet at his riad with the rebel leaders. This prompted Jack and player to investigate the souk again.

Omar was interrogated again after finding the victim's urine in an antique bowl in the riad. He said the bowl was an ancient artifact and costed him a fortune to secure it. The victim had come one night intoxicated demanding that Omar give him all the contact information on the tribal leaders. When Omar refused, the victim proceeded to relieve himself in the bowl. Omar was not surprised that Adam was murdered, saying the victim had no respect for authority, history, or order.

Omar was found innocent after the team incarcerated Christy Mathis for killing Adam, but was spoken to by the player and Marina regarding a conversation he had with hired gun Jonah Karam. After analyzing an answering machine between the two, she found out that Jonah was trying to get some information out of him, but Omar did not seem the least bit worried at him. Omar said that Jonah wanted to speak with some tribal leaders regarding a possible rebellion, but Omar did not trust him and thusly refused. Other than that, he did not have anything else regarding Jonah other than he spoke from the docks, prompting the player and Marina to look there for clues.

Omar became a suspect again after his saliva was found on a golden spoon in Sultan Mahmoud's palace. He explained the Sultan contacted Omar regarding tribal strategy, which is Omar's field of expertise. Carmen was curious how he could have possibly helped when dealing with a protest, all he said was that he was doing everything he can to make sure everyone gets out of this situation alive.

Omar was spoken to again about a video the victim left on Buzzer. He apparently left a comment on it saying that Hamza should lead by example.he admitted he and the victim had some differences regarding his leadership of the protestors. According to Omar, the victim was not afraid of sacrificing other people's lives, but when it came to his own life he was nowhere to be seen. When Carmen pointed out his relations to the Sultan, Omar simply said the situation was complicated and the team would not understand.

Omar was found to be innocent again after the team incarcerated Thomas Cox for Hamza's murder.

Omar became a suspect for a third time after Carmen and the player discovered a note to the victim, which according to Marina, was written by him. He explained that Anir's tribe used to be peaceful, until he turned them into a group of armed terrorists. He tried to warn Anir about radicalization, but Anir was led astray by The Sword. Carmen said that the victim was involved with The Sword in kidnapping US Ambassador Jessica Stern's son Andrew, to which Omar replied saying that if The Sword kidnapped him, he would be kept alive as long as he is useful. He went on to say that The Sword will use the child to bait them, and saluted the player and Carmen for rising to the challenge, and that it is a foolish but brave way to die.

Omar was interrogated again about a sword used to poison Dupont, who mentioned Omar before falling unconscious. Though he said chemistry is a hobby of his, he said he did not poison Armand. He believed Armand meant that he could help with translating the Arabic message on the sword, which he did. The sentence meant, "every soul will taste death", which is often said by Sultan Mahmoud. Carmen was not sure to trust Omar, and arrested him on suspicion before she and the player spoke with the Sultan regarding the sentence.

At the end of it all, Omar was unmasked as The Sword, responsible for killing Anir, kidnapping Andrew Stern, and killing Chief Ripley. Upon admitting to his murder, Omar revealed he had the mission of growing conflict and extremism across the Sahara. He then admitted he had killed Ripley and had Anir abduct Andrew to lure the Bureau into his trap in Iraq. Without revealing his reasons behind Anir's murder, Omar attempted to kill Carmen and the player with a poison grenade, only to be shot dead by Jonah from a distance. 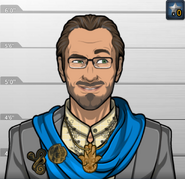 Omar, as he appeared in Murder by Proxy (Case #7 of World Edition). 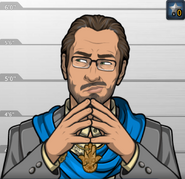 Omar, as he appeared in Killing Spring (Case #9 of World Edition). 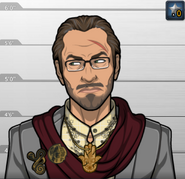 Omar, as he appeared in Die by the Sword (Case #12 of World Edition).

Omar Bahir, shot in the head during his arrest for the murder of Anir Aznag and for kidnapping Andrew Stern. 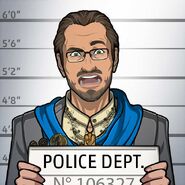 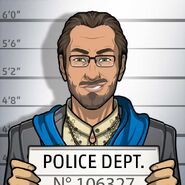 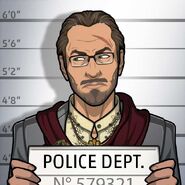