Initially appearing as a 28-year-old hippie, Ezra is seen with tattoos on his right shoulder, two bracelets and two rings on his left hand, and several necklaces. He has long black hair along with a black beard and mustache.

In his first suspect appearance, he has scratches on his left shoulder. It is known that Ezra has asthma and eats sunflower seeds.

In his second suspect appearance, he wears an earring in his left ear and his scratch marks are replaced by burn marks. It is discovered that he wears army boots and does spelunking.

In his third suspect appearance, now as Padmasana, a 29-year-old guru, he wears a red robe, several necklaces, a turquoise bead and a nose ring. He also wears a tilaka mark and a diamond earring. As Padmasana, he has written a book named The Flashing Light. It is revealed that he is right-handed, has a criminal record and quotes Gandhi.

In his fourth suspect appearance, it is noted that he drinks chhaang, wears hiking boots and sews.

In his fifth suspect appearance, he has a tattoo of a lion on his neck. It is learned that he drinks butter tea, owns a Tibetan Mastiff and knows drum rituals.

Ezra was first approached by Amy and the player when they found a picture of a flower with a note addressed to the victim from him. When asked if he and Bruce Green were close, Ezra explained that the victim was "pretty cool" and liked the way he would talk about science. He also revealed that Bruce brought him sunflower seeds. As Amy told him that Bruce was murdered, the hippie admitted he liked smoking with the victim and that he would miss him.

Later on, Ezra came to the police station to tell the team that he thought he had killed the victim. The player did not hesitate to arrest the hippie and have him questioned again. When asked if he really was the murderer, Ezra only remembered that he was very angry with Bruce because the latter would not make weed grow in the desert. As Amy countered that weed was illegal, Ezra explained that he took weed for medicinal reasons, particularly his asthma, and he got this advice from Chief Zuma Tlatoani.

Ezra was proven innocent of murder, but he was caught in the red when Russell and Amy identified his handwriting on a poster of the oil well being bombed―signifying a possible apocalypse. While delusional, Ezra told Amy and the player that mankind will destroy the world by polluting its grounds. He told the team to go to Dust Town to look for the "signs" he had supposedly seen.

Ezra was flagged as a suspect once more when Frank and the player found his poster that represented the Alien Festival. Ezra described the festival to the team: the aliens would come and spread peace all over the planet when the big statue would be lit up. As the hippie seemed shocked that Colonel Spangler had died, he went on to explain the he did not see many people from the army around Rhine Canyon. Ezra claimed that the festival was about peace and welcoming the aliens to Earth, not about war. When asked if he knew that aliens did not exist, Ezra angrily replied that he did not know the colonel and he did not want any trouble.

Ezra was approached again when the team found another poster of his, this time warning the army to leave the orb in the cave alone and that they were not welcome. The hippie admitted that he and the colonel had an argument about the cave; the former believed that the cave had mystical powers that were used as a gateway to alien civilizations, and he wanted to keep it safe from the military, believing that they would use the powers as weapons. Ezra claimed that he had learned spelunking in order to protect the cave, overcoming his claustrophobia: the fear of enclosed spaces.

Despite being framed for the murder, Ezra was found innocent when Pearl Montana was incriminated as the killer.

After the trial of Dr Sumati Misra, Lars and the player found a camera in the Hanuman Statue. Elliot revealed that Bodhi Green had many mysterious meetings with a religious sect led by Guru Padmasana. The camera recorded Om talking about a light illuminating the soul to a multitude. Upon interrogation, Bodhi only said that the guru was the light in a world of darkness and that people were purified by his light. He revealed that he knew only of his name, but he stated that the guru would be leading a spiritual gathering in Mumbai.

Om became a suspect after the player and Jack discovered the victim was investigating him. When asked if he knew the victim, he replied saying that many people come to him and he does not ask for their names. Jack believed taking to him was a waste of time as he went going on about talks of spiritual stuff, so they decided to leave him for now.

Om was spoken to again regarding a message he received from the victim, questioning his authenticity as a guru. He thought Deepak was a seeker of truth as he went to his spiritual gatherings, but then he realized he was a cop. Though he confessed he committed crimes in a past life, he said he was re-born when he saw the flashing light.

Om was found to be innocent again after the team incarcerated Amrita Kumar for Deepak's murder. However, the player and Jonah wished to look into what the victim was investigating, which happened to be the guru. They eventually found his passport, and it revealed that Guru Om Padmasana was actually Ezra Hope. The passport was sent to Elliot and he managed to confirm that Om and Ezra were one and the same. When talked to about this, he said he did not remember much of his old life due to being too stoned. Jonah believed that Om was just talking nonsense, so Om pointed him and the player to the museum for more answers, so they investigated the museum.

Elliot's work on yogini Averly Worthington's laptop revealed that her will would leave all of her money to the esteemed guru. It was also revealed that Averly had made emails and bank transactions to the spiritual leader. Carmen was disgusted to find out that the guru was taking money from his followers and demanded to talk to Averly herself, who revealed that the guru was giving a speech at the Shiva Temple in Bangalore.

When confronted by the team of receiving money from his followers, Om nonchalantly replied that his followers would give him money in thanks of cleansing their souls. He believed that it would be wrong to refuse their humble offerings. He then believed that Carmen was overly skeptical and believed that she needed to meditate more often. Later on, when the team gathered in headquarters, Jack agreed with his colleague that Om was most likely conning his followers into giving money for a shady purpose.

Om had become a suspect again after finding a message to the victim in one of his books at the temple. He was surprised to hear of Lam's murder, saying he seemed ready to continue his journey. Carmen suspected Om knew why his arm was chopped off, but Om insisted he was a believer of non-violence. As part of his retreat, he was studying with the victim believing the old have so much wisdom. However, he wanted to share with the victim what he learned due to the flashing light.

Om was interrogated again about a video of him getting drunk with the victim. He was shocked to know they saw the video, saying he knew he should not have trusted him when he said the chhaang was a sacred beverage would help him walk through walls. Unfortunately, he believed him and kept walking into walls. Om went on to say a few of his followers saw the video and left him, was worried the video would make him lose more.

Om was found to be innocent a fourth time after the team incarcerated Tashi for Lam's murder. However, he had to be spoken with again about some money he donated to the One Mother Milk charity. Marina accompanied the player, but found he was not at the temple, and ended up speaking with Averly Worthington instead. She insisted they speak with her instead, but she never questioned Om's decisions about where the money she gave him went. Marina and the player then decided to look around the temple, so they could find the answers they were looking for.

Om became a suspect once again after the player and Jack after they found his DNA on a packet of OMGel. When Jack accused him of his affiliation to O.M. MediLab and SOMBRA, Om said he was not that kind of person. Om also said he was simply giving to a charity, and had no idea what SOMBRA even was. Plus, the gels they found were sent as a gift to him so he could share them with his community.

Om was interrogated again about a message he sent to the victim on a book regarding death. When informed of the book he sent to Sandeep, Om got furious saying he was not a murderer. Jack was not buying it given his donations to SOMBRA and the book he gave to the victim, but Om said the book was about the consciousness of death not killing people.

In the end, Om was found to be innocent after the team incarcerated Warren Goodfellow for Sandeep's murder. It was also revealed by Warren that Om was not behind O.M. MediLab, so The Bureau felt they owed him an apology. He said that no harm was done and forgave them for their prior suspicions about him. But he was saddened at his followers' donations were taken from him by SOMBRA. Carmen said the Bureau would be happy to retrieve his funds for him, so the Guru suggested they start at his sanctuary for any clues that could help. With Elliot's help, they were able to recover part of the money and return it to him. 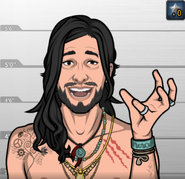 Ezra, as he appeared in The Seeds of Death (Case #41 of Pacific Bay). 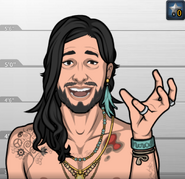 Ezra, as he appeared in The Ties That Bind (Case #44 of Pacific Bay). 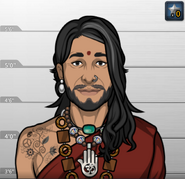 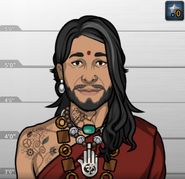 Ezra, as he appeared in Insides Out (Case #24 of World Edition). 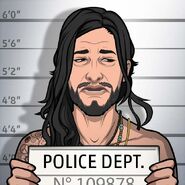 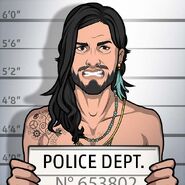 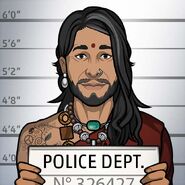 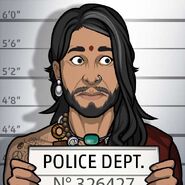 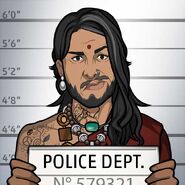