Olivier Feraud was the killer of journalist Jude Connelly in Diamond in the Rough (Case #40 of World Edition).

Olivier is a 37-year-old field photojournalist of French origin. He has curly brown hair and a beard, and a sunburn on his cheeks. He dons a midnight gray coat with diamond dust on his left shoulder, a cloudy gray scarf and a camera around his neck. It is known that Olivier holds expertise in mechanics, and that he consumes caterpillars and hoodia.

Olivier became a suspect after Carmen and the player identified him from a selfie on his smartphone found at the crime scene. He was excited to meet Carmen because of her work, but explained he dropped his smartphone when he saw the body. Carmen was shocked that he did not report it, but Olivier replied saying he needed to leave since he and Jude were doing a report on diamond smuggling, and he was worried they could be after him next. He suspected the diamond smugglers killed him, since Jude chased the story all the way to the smugglers' lair, prompting Carmen and the player to examine that area for more clues about the murder.

Olivier was interrogated again about his notes saying that Jude had gone too far, which contained a picture of the victim running off with a diamond. He said the two of them went to the mine to get pictures regarding the smuggling, Olivier got distracted with helping Clayton Rose, saw the victim slipping a diamond into his pocket and took a picture. The victim told him he was just seeing things, but Olivier had trouble believing him.

At the investigation's climax, it was revealed that Olivier was the one behind Jude's murder. Olivier eventually admitted to killing him in self-defense. He claimed Jude wanted him dead after he had taken the photo of him trying to smuggle the diamond. One night, the two journalists went to the mine supposedly to do research only for Jude to attack him there. In defense, he threw dirt into Jude's eyes and went to the drill bit to activate it. It turned on and Jude's internal organs were practically juiced. Judge Adaku sentenced Olivier to 15 years in prison, with a chance for parole in 5 years. 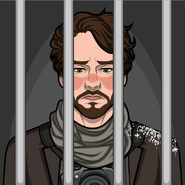 Olivier, sentenced to 15 years in jail for the murder of Jude Connelly. 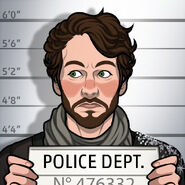 Retrieved from "https://criminalcasegame.fandom.com/wiki/Olivier_Feraud?oldid=408704"
Community content is available under CC-BY-SA unless otherwise noted.