Olive is the 16-year-old daughter of Judge Powell. She has light red hair in a ponytail and brown eyes. She wears a black shirt with a gold outlined confused face and "NEVERMIND" written in gold letters as well a multicolored charm necklace, and three silver piercings, one on her left ear and two on her right ear. It is known that Olive went to GrimCon and drinks Incredible Bulk cocktails.

In her quasi-suspect appearance, she does not wear her charm necklace.

Olive became a suspect after Jones and the player learned that she was a fan of the victim. Initially thinking that the two were there to see her mother, she was informed about Marcus' death. This led her to burst into tears as she wondered who would write Miracle Girl comics after Marcus' death.

Olive was spoken to again about the insulting text messages that she sent to the victim. She revealed that Marcus was going to kill off Miracle Girl, who was the only superhero that spoke to her soul. The revelation infuriated her, leading her to send the victim the insulting texts. Olive's involvement in the case later prompted Judge Powell to arrive at the precinct and cause a scene.

Olive was found to be innocent after the team incarcerated Haruki Kato for Marcus' murder. But she later caused Gloria and the player panic when she disappeared with Carter Hayes, Gloria's son. The two were later found at the victim's comic studio, where Gloria grounded Carter and told Olive that she would inform her mother about their disappearances.

After arresting Ryan Min's killer, Olive came to the station, telling Rita and the player that her mother, Judge Powell, had gone missing. She then explained that her mother had not come home from Felix's trial and that she was never late, leading her to worry. She also told the team that her mother usually took a shortcut through Hutshing Square while walking to and from work, prompting them to investigate the square.

The team then found Judge Powell, who had been kidnapped by the sons of a man she had sentenced to prison. After Rita and the player arrested her kidnappers, Judge Powell was taken back to the station, where she reunited with Olive. 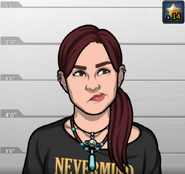 Olive, as she appeared in Color Me Murdered (Case #22 of The Conspiracy). 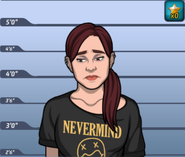 Olive, as she appeared in Lights Out (Case #50 of The Conspiracy). 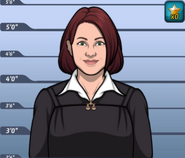 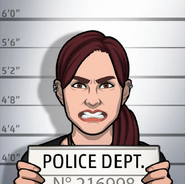 Retrieved from "https://criminalcasegame.fandom.com/wiki/Olive_Powell?oldid=535419"
Community content is available under CC-BY-SA unless otherwise noted.