Olga is a 26-year-old shot putter from Russia. She has bob-cut blonde hair and blue eye liner. She dons a chartreuse shirt with an Olympic bib, a butterfly tattoo on her left arm, a bandage around her right wrist, and chalk on her neck. She is usually seen carrying around a pink and white towel and a puck. It is known that Olga does capoeira, is superstitious and drinks caipirinha.

Olga became a suspect after the player and Michelle identified her from a picture of her and the victim. She explained that she and the victim were lovers, ever since the opening ceremony at the Olympics. Although she had been warned previously about relations at the Olympics, but she felt that their relationship was a beautiful one.

Olga was interrogated again about the victim's medal, which contained traces of chalk. She said she stole it because he cheated on her with a synchronized swimmer, which broke her heart. She was so depressed that she lost the competition and the gold, which prompted her to steal Oscar's medal as payback for what happened.

Olga was found to be innocent after the team incarcerated Edson Caetano for Oscar's murder. 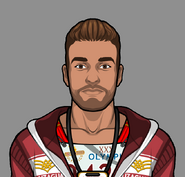 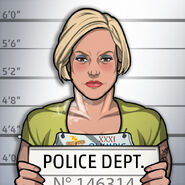 Retrieved from "https://criminalcasegame.fandom.com/wiki/Olga_Chizhova?oldid=456285"
Community content is available under CC-BY-SA unless otherwise noted.