Smythe is a 32-year-old officer of the Justice Corps with an apprenticeship under the victim. He dons a gray uniform with gold buttons and a black cap with the Justice Corps insignia, covering his brown hair and his concussion. He also has a brown mustache and a bruise on his left eye due to being hit by a frying pan. It is known that Smythe knows self-defense and military history.

Officer Smythe became a suspect when Lady Highmore hit him with a frying pan and after Maddie convinced him that it was just a misunderstanding. He then asked for Maddie and the player to report to him as soon as possible. When interrogated, he said that Jaubert was his cherished mentor and that Jaubert made sure that he was trained well. Afterwards, Maddie told Smythe that he should look elsewhere and that they would report to him as soon as possible.

Isaac and the player had to talk to Smythe again after a report that Evie analyzed revealed that Jaubert had been hard on him after his lack of information on the resistance during his investigations. He then said that Jaubert was very harsh to him, and one time when he interrupted Judge Umbright Jaubert took her canned meat and threw it at him. He proceeded to say that although Jaubert was his superior, it was a relief that he was gone.

In the end, Smythe was found to be innocent after the team found Giulietta Capecchi to be Jaubert's killer. However, he tipped off the Justice Corps that the Squad was hiding something from him during the investigation. This led the Corps to conclude that the Squad was sympathetic with the resistance and arrest the entire Squad.

When the Squad confronted Mayor Lawson to bring him down once and for all, Officer Smythe and another Justice Corps officer came to Lawson's aid, armed with rifles and acting as his backup. However, after he was shot down, the officers surrendered, saying they were only following Lawson's orders. 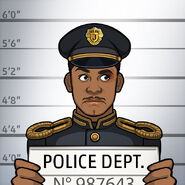 Retrieved from "https://criminalcasegame.fandom.com/wiki/Officer_Smythe?oldid=481525"
Community content is available under CC-BY-SA unless otherwise noted.