Obāsan (Jpn: お婆さん) was a suspect in the murder investigations of adoption agent Li Jun in Dead in the Water (Case #26 of World Edition) and TV producer Gwak Sung-ho in Oh! Crazy Kill! (Case #28 of World Edition), and the killer of teenager Tsukada Hiroshi in The Murder Games (Case #30 of World Edition).

Obaasan is an 80-year-old retired woman. She has gray hair which is tied in a bun and decorated with two sticks and white flowers. She dons a blue kimono and a pair of golden earrings.

In her first appearance, she has a panda badge on her kimono. It is known that Obaasan practices calligraphy and eats gong bao chicken.

In her second appearance, she ditches her panda badge. It is discovered that she plays hwatu.

In her third appearance, it is revealed that she is skilled with a crossbow, likes puzzles and speaks Japanese.

Obaasan became a suspect after the player and Jack found her tablet at the restaurant the victim frequently visited. She said she was in Sichuan on a vacation from Japan, and befriended the victim while she was around. The two of them were new to the area, so they talked together often. When Jack asked if she came for any work related reasons, Obaasan said she did not know, likely because she was too busy talking to ask her.

Obaasan was interrogated again about a threat she wrote to the victim telling her not to stick her nose where it did not belong. She said the threat was regarding her profession as an adoption agent. She was furious at how adoption agencies meddled in family affairs and distributed children as they please, pointing out how families were in her day, and how people like Jun were destroying traditional family values.

In the end, Obaasan was found to be innocent after the team incarcerated Ellen Morowitz for Jun's murder.

Obaasan became a suspect again after Carmen and the player found her tracking device which was tracking the victim. She said she had it because her son was sick of asking where things were, which saddened her since he let some machine look after his mother instead of helping her himself. When Carmen asked why it was tracking the victim, she said one of her grandkids rigged it to follow celebrities. She strongly felt that kids nowadays were too obsessed with TV and celebrities and should be studying to make something of themselves. However, her grandkids begged her to bring them to a live taping of "Oh! Crazy Kids!", because SILVERee was going to be there, so she brought them because she felt she could not deny them anything.

Obaasan was spoken to again about an apparent threat that she wrote to the victim, requesting her grandson be on his show. Despite what she said about the show previously, she wanted the victim to put her grandson in the talent segment of the show. She felt her grandson was a genius, especially compared to the other kids on the show. Carmen wondered why she wrote in red ink, which according to Dupont in Korea it means they want that person dead, Obaasan said she could not find any other pen.

In the end, Obaasan was found innocent again after the team incarcerated Kang Dong-yun for Gwak's murder.

Obaasan became a suspect for a third time after Carmen and the player found her hair on a pincushion of children, with needles on them. She said she was at the temple because she was looking after runaways and orphans. When asked about the pincushion, she dismissed the fact children were on it and said she used it when she was feeling stressed. Carmen informed her of Hiroshi's murder which shocked her, then she blamed the player for bringing death everywhere they went.

Obaasan was interrogated again about a photo of her and her classmates, with all but her crossed out. She explained that as the years went on, her classmates died so she crossed out their faces as they died. Carmen felt that was pretty grim, to which Obaasan said that the days prior to the war were as grim. When she pointed out that the weak die, Carmen immediately became suspicious as that slogan was used by SOMBRA, but Obaasan said she had no idea what they were talking about.

At the climax of the investigation, it was revealed that Obaasan was behind Hiroshi's murder, as well as the whole orphan kidnapping scheme and subsequent hunt. After denying involvement, Obaasan admitted she shot Hiroshi with a crossbow because she thought him weak for refusing to take part in The Hunt. Furthermore, Obaasan believed only SOMBRA could provide the children with a good future. Judge Adaku sentenced her to life in jail for Hiroshi's murder, the abduction and brainwashing of orphans, and obstruction of justice. 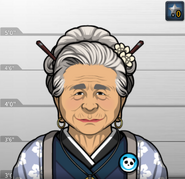 Obaasan, as she appeared in Dead in the Water (Case #26 of World Edition). 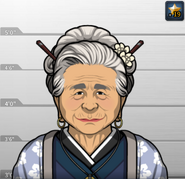 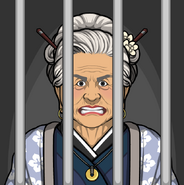 Obaasan, sentenced to life in jail for the murder of Tsukada Hiroshi and for the recruiting and brainwashing of children across Asia. 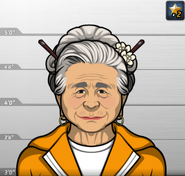 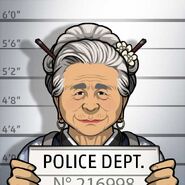 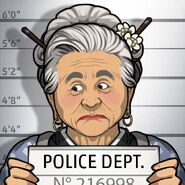 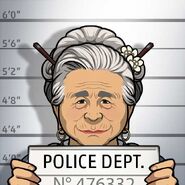 Retrieved from "https://criminalcasegame.fandom.com/wiki/Obaasan?oldid=529555"
Community content is available under CC-BY-SA unless otherwise noted.